For other uses, see Chomper (disambiguation).

Inhales up to three zombies, doing heavy damage. Then burps, pushing back all zombies in her lane.

Chomper is an Epic Scrapper plant introduced in Plants vs. Zombies 3. She attacks by eating zombies whole when they get near her.

For more information about this character, see Chomper.

Chomper is a Scrapper plant obtained after beating Floor 26 of Devour Tower. Her seed packets are more likely to be dropped in Mulchburger Fast Food breakout levels.

She costs 5 sun and functions identically as she has in previous games, she eats the first zombie that approaches her whole, instantly defeating them. If a zombie is too large for her to eat (say a Gargantuar or a Brainiac Boss), she merely bites at them instead.

When she eats a zombie, she then has to chew for a short time, leaving her vulnerable to zombie attacks.

Her Tacobility is a reference to her Burrow ability from the various Shooter games she appears in.

Chomper's Tacobility is named Ambush, which allows her to burrow underground when she's chewing, no longer leaving her vulnerable to attacks. When she is finished chewing, she can then eat any zombies walking above her when she's underground, and chews them slightly faster.

A Chomper can eat a Zombie in an instant, however it takes a while for it to swallow the Zombie. It is recommended that a Wall-Nut or another Wall plant is placed in front of her. 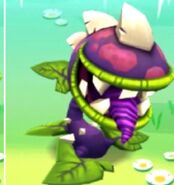 Chomper's appearance in-game
Add a photo to this gallery

Retrieved from "https://plantsvszombies.fandom.com/wiki/Chomper_(PvZ3)?oldid=2302992"
Community content is available under CC-BY-SA unless otherwise noted.