Rare
Chomp Thing might seem kind of gross to you and me. After all, what kind of Plant spews mud and dirt and bugs? Well Chomp Thing doesn't care what you think! He thinks he's the best!

In Garden Warfare 2, a single Chomp Thing appears as a boss in the "League of Awesome" quest, in which he has eaten Toxic Brainz and must be defeated to continue the quest. Due to him being a champion, he has more health than the average Chomp Thing (as he can withstand one ZPG without being vanquished).

"Chomp" is in place of "Swamp" and "Man." In the former's case, also referring to how he is a Chomper and how the words Chomp and Swamp rhyme.

Chomp Thing might seem kind of gross to you and me. After all, what kind of Plant spews mud and dirt and bugs? Well Chomp Thing doesn't care what you think! He thinks he's the best!

​Chomp Thing can regenerate his health slightly faster than your average Chomper!

The primary weapon of the Chomp Thing is Swamp Spray. It deals 7.5 damage and hits much more rapidly than other spray attacks. This variant also regenerates health sooner and faster than other plants. He receives a damage upgrade to his primary weapon, unlike other Chompers.

Pull yourself around a little faster with stronger vines!

In the presence of the fast regeneration, Chomp Thing is a stealthy Chomper, along with Count Chompula. Try to hide around corners, attack the lone zombies, or swallow zombies dragging behind in zombie groups. If you are forced into close quarters, flank and vanquish them quickly, then hide and regenerate your health. In Plants vs. Zombies: Garden Warfare 2, you should get the regeneration upgrade, for the quick regeneration time ability along with said upgrade can result in quick recovery or escapes.

Like all Chomper variants, attack Chomp Thing from a distance. He is useless at long and medium-range combat, though he can still Goop you even if you are out of his reach. He does not have any lasting effects like Toxic Chomper or Fire Chomper but regenerates health quickly. If you see him regenerating health, damage him to stop his health regeneration. 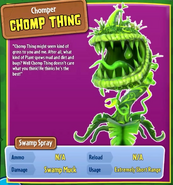 Chomp Thing on the Legends of the Lawn billboard image

Appearing in the League of Awesome quest