Chomp Cannon is a super rare alternate ability for Chomper in Plants vs. Zombies: Garden Warfare 2. It is a replacement for Goop. When used, the Chomper charges up for a few seconds. Once it is done, it will fire an exploding goop shot. It takes 15 seconds to cool down after being used. If it hits a zombie directly, it can deal up to 100 damage. Even if it isn't a direct hit, it still deals splash damage. These factors make the Chomp Cannon somewhat equivalent to the Foot Soldier's ZPG and Kernel Corn's Shuck Shot. However, unlike Goop, it will not goop the zombie, and it also will drop after time. 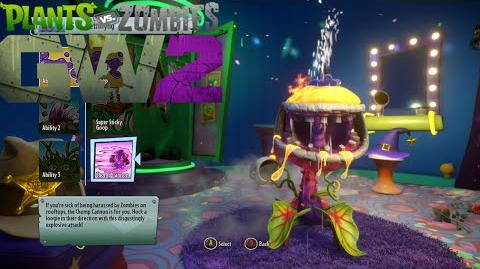 Retrieved from "https://plantsvszombies.fandom.com/wiki/Chomp_Cannon?oldid=1708048"
Community content is available under CC-BY-SA unless otherwise noted.