When played on Heights: This gets +1

It's a growth industry.
Chimney Sweep is a premium uncommon zombie card in Plants vs. Zombies Heroes and a member of the

when he is played on the heights. His closest plant counterpart is Cabbage-Pult.

He is based on a chimney sweep, a worker who cleans the inside of chimneys.

His description is a reference to the fact that children were used to clean rich people's chimneys in the Victorian era.

It's a growth industry.

This is a good zombie to start your game with, as he only costs 1 brain to play while having above average stats (when played on a heights lane).

Whenever you get this zombie into your deck, try to play him on a heights lane, as this will give him a small stat boost. If Chimney Sweep manages to survive until the next turn (which is very unlikely, though), boosting cards like Camel Crossing, Yeti Lunchbox, and Sugary Treat would be worthwhile, as a 3

Chimney Sweep has better stats than most zombies playable by turn 2.

But in the late game, Chimney Sweep's usefulness decreases, as his stats are not very good late game; at that point, he will only be able to serve as a cheap swarming option. Foot Soldier Zombie is an alternative for the later game to play on a heights lane (though only Professor Brainstorm can primarily do this), as he has better stats than a boosted Chimney Sweep and a versatile damaging ability, although it is much more expensive. For more universal alternatives, there are Mountain Climber and Moonwalker - the former has the

Bullseye trait, which can really shine with bonus attacks, while the latter is more versatile in terms of placement.

If your opponent plays this zombie, it will almost always be on the heights. A 1-sun cost plant that can do 2 or more total damage is ideal, such as Bonk Choy or Shroom for Two. Alternatively, you can play a trick if you want to get rid of him, the best example being Banana Bomb. You should do this in the case your opponent is Rustbolt since he can play Jurassic Fossilhead on him the next turn if not destroyed.

If he really threatens you, you can use Whack-a-Zombie to defeat him. However, you are better off playing it to destroy zombies more dangerous than him, and more importantly, this strategy is only restricted to 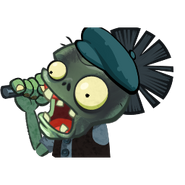 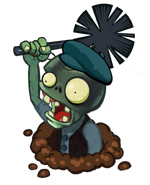 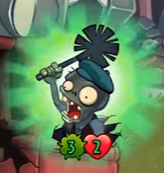 Sunburn being played on Chimney Sweep

Whack-a-Zombie being played on Chimney Sweep

Gigantic Chimney Sweep due to a glitch

Chimney Sweep with the 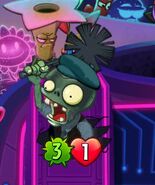