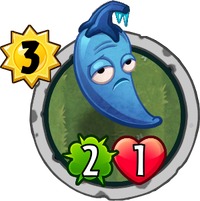 For the version in Plants vs. Zombies Adventures, see Chilly Pepper.

Freeze a Zombie.
"It's not easy being both hot *and* cold. A comfortable lukewarm might be nice for a change."
Chilly Pepper is a premium rare plant card in Plants vs. Zombies Heroes and a member of the

. It does not have any traits, and its ability gives a selected zombie the

Freeze effect when it is played. Its closest zombie counterparts are Ice Pirate and Cryo-Yeti.

It is based on the plant in Plants vs. Zombies Adventures with the same name and appearance.

"It's not easy being both hot *and* cold. A comfortable lukewarm might be nice for a change."

Despite having low stats, Chilly Pepper's ability to

Freeze a zombie and the capability to attack zombies itself can help you if used correctly, as it gives you a chance to heavily cripple, and even destroy a zombie while it is completely vulnerable. Good zombies to activate its ability on are glass cannons, as it makes them unable to hit you and let a plant, most likely itself, destroy them easily due to their pitiful health. It can also effectively

This plant is very helpful in conjunction with Snowdrop and Winter Squash, as it activates both their abilities instantly. However, Iceberg Lettuce is a much cheaper alternative if you are playing it to only

Freeze a zombie, so take this as an Iceberg Lettuce with an extra plant.

Rescue Radish is a good plant to use with this, as it allows you play this once more to

Be careful to not play this in Total Eclipse, as doing so will cause that environment's ability to destroy Chilly Pepper before it can

If you are Rose, you can have Wing-Nut on the field to ensure that the zombie is forced to skip its turn.

Avoid playing it when Cryo-Yeti is on the field, as he will boost himself once it Freezes a zombie.

Due to its low health of 1, you should have no difficulties in destroying it with any damaging zombie card. Even stat-degraders like Nibble should be a big threat to it. If there is a zombie in a tight situation due to being frozen from Chilly Pepper's ability, simply heal it with Medic or play health-boosting tricks such as Vitamin Z to keep it alive for an extra turn for it to be defrosted.

Brainy hero, you can use Lurch for Lunch or Electrician to negate the

Freeze effect on a zombie, so that it does not need to skip its attack. However, this is useless if Wing-Nut is on the field.

It is not recommended to Bounce this plant, as its relatively cheap cost will allow it to be easily played again, freezing another zombie again.

The best way is to have Cryo-Yeti on the field, as he will recieve a boost once it Freezes a zombie. 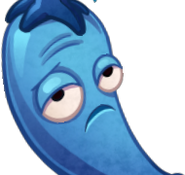 Chilly Pepper attacking from the player's point of view

Chilly Pepper attacking from the opponent's point of view 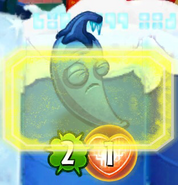 Chilly Pepper with the

The player receiving Chilly Pepper from a Premium Pack

The player receiving Chilly Pepper from a Premium Pack

Chilly Pepper on the advertisement for the Green Shadow Ally Pack