For other uses, see bean.

N/A
The Zombies often confuse the Chili Bean with Brainz, racing to eat it. It has a short fuse and deals massive damage to all nearby Zombies.

N/A
The Zombies often confuse the Chili Bean with Brainz, racing to eat it. It has a short fuse and deals massive damage to all nearby Zombies.

Its alternate abilities are Sombrero Bean Bomb and Dark Bean Bomb (Garden Warfare 2 only). In Battle for Neighborville, the ability deals 125 damage in its inner blast and 15 damage in its blast radius.

The Zombies often confuse the Chili Bean with Brainz, racing to eat it. It has a short fuse and deals massive damage to all nearby Zombies.

Spit an explosive bean that detonates after a delay.

Chili Bean Bombs can also bounce off walls. This ability is very effective in Garden Ops, since all the zombies near it will approach it while it explodes. This will give you a multi-kill very easily and will give you many coins. In case the player is about to be vanquished and unlikely to be revived, they can toss the Chili Bean Bomb as a last-ditch effort. The Chili Bean Bomb is very good for defense in Gardens & Graveyards, as it will either vanquish the zombies or force them to retreat.

In Garden Warfare 2- The Bean Bomb is much more effective in this game. It can be used in Herbal Assault in a similar fashion as it is in Gardens & Graveyards. The only difference is that zombies are required to stay within the zone, and may not even notice the bomb be vanquished in the flurry of chaos trying to defend the base.

Overall, it should generally be used when there is a large group of zombies, most preferably capturing the garden. You should sneak up on the zombies and then place it quickly so they don't see it and so they will all be vanquished.

In Battle for Neighborville- Due to the Bean Bomb functioning nearly identically in this game as it has in the Garden Warfare series, most of the same tips apply. But, there is one change that ends up making this ability less reliable: its blast radius. The Chili Bean Bomb's blast radius has been changed in Battle for Neighborville, and now, catching Zombies in it is far less consistent. Sometimes the radius is larger than you expected, sometimes smaller. It is highly advised to not depend on your Chili Bean Bomb as heavily, as the inconsistency of its blast radius means its a much more risky option that doesn't always do what it wants you to.

On top of the Chili Bean Bomb having an inconsistent blast radius, Battle for Neighborville also introduces sprinting, which makes it even more difficult to catch Zombies in the explosion. When a Zombie sees your very loud, very flashy, and very hard-to-miss chili explosive, they can simply sprint away to escape danger, making this ability end up feeling fairly useless sometimes.

The one upside to these changes is that people still see the Chili Bean Bomb as a threat. Even if you aren't vanquishing your enemies, you are forcing them to scatter, and that becomes the Chili Bean Bomb's new purpose. When activating it, don't use it with the intention of vanquishing your enemies, but instead creating space and denying area. Remember that activating it almost guarantees that every Zombie nearby will have to flee, meaning you can stop them from capturing objectives. In fact, a Chili Bean Bomb activated during the last few seconds of the round timer can even win you the game!

Chili Bean in a trailer about to explode 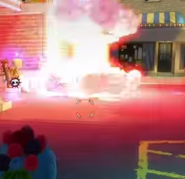