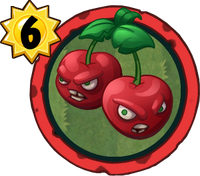 Do 4 damage to each Zombie here and next door.
Explode? Detonate? ... Explodonate!

For other versions, see Cherry Bomb.

Cherry Bomb is a premium super-rare plant trick card in Plants vs. Zombies Heroes and a member of the

to play, and its ability does 4 damage to a selected zombie and those on the lanes adjacent to it, if there are any.

It is based on the plant in Plants vs. Zombies with the same name.

The word "Cha-Boof!" that is seen when it explodes references Cherry Bomb's explosion onomatopoeia from Plants vs. Zombies 2.

Its description is a reference to its Suburban Almanac entry in Plants vs. Zombies.

Cherry Bomb, while very expensive, is a decent trick to have, as it can destroy groups of most zombies. While there are better options (mainly fighters) to deal with them for the same cost, Cherry Bomb can destroy the zombies before your opponent can play tricks to benefit them, and before they engage in combat.

Cherry Bomb also benefits from berry synergy; Sergeant Strongberry and Strawberrian do extra damage once Cherry Bomb is played, while High-Voltage Currant can get up to +3

However, while Cherry Bomb excels in clearing groups, it is inefficient against single targets; for those, Berry Blast, Banana Bomb, and even Sizzle are more cost-efficient. Also, do not play Cherry Bomb on the first or fifth lane, as its ability will be less effective.

The best counter against Cherry Bomb is to grant your zombies immunity against it. Parasol Zombie gives permanent immunity until she is destroyed, while Gravestone zombies, Mixed-Up Gravedigger, and Zombie Coach will discourage your opponent from playing Cherry Bomb for the turn they are played.

If you have no choice but to take the full blast of Cherry Bomb, try to spread out your strong fighters so it cannot hit them all at once. You could use Ra Zombie, Turquoise Skull Zombie, or Defensive End to stall it from being played, but these solutions will not last for long. Either way, keep your zombies as healthy as possible, although this may be hard for swarm decks; if you are running a swarm deck, aim to defeat your opponent before this trick can be played.

Fortunately, it should not be as threatening later in the game, as you will probably have access to zombie fighters that can survive a Cherry Bomb such as Octo Zombie and Zombot Plank Walker.