Blows up nearby zombies

Cherry Bomb was a plant in Plants vs. Zombies Adventures. They were an explosive plant, and when placed, blew up all zombies in a 7x7 area. They were the first instant kill plant which the player received. The player unlocked them after reclaiming The Workshop Lot.

They based on the plant in Plants vs. Zombies with the same name.

The term "short fuse," meaning a tendency to lose one's temper quickly, in the 1st sentence of their news feed description involves the fact that they are an explosive plant and the other sentence describes how to use them; while their Facebook page description is exactly the same as their Suburban Almanac entry in Plants vs. Zombies.

Cherry Bombs have very short fuses. Plant one near a zombie and see what happens.

"I wanna explode," says Cherry #1. "No, let's detonate instead!" says his brother, Cherry #2. After intense consultation they agree to explodonate. 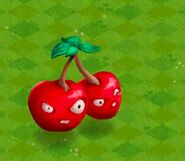 Cherry Bomb about to explode

Cherry Bomb received after The Workshop Lot is reclaimed

A Cherry Bomb topiary
Add a photo to this gallery

Retrieved from "https://plantsvszombies.fandom.com/wiki/Cherry_Bomb_(PvZA)?oldid=2174940"
Community content is available under CC-BY-SA unless otherwise noted.