Chemist is a Rare variant of the Scientist in Plants vs. Zombies: Garden Warfare and Super Rare in Plants vs. Zombies: Garden Warfare 2. He is a very exaggerated variant of the Scientist's power at close quarters combat. The Chemist's weapon of choice has a much further width of deviation, but only goes approximately one to three feet away from the player. He deals 40 damage in Garden Warfare and 35 in Garden Warfare 2 at any range. Dealing this damage can easily take out enemies, since there is no character that deals better damage at close range like the Chemist other than the Marine Biologist.

The Chemical Beaker Blaster (Beaker Blaster in Garden Warfare 2) is the primary weapon of the Chemist. The facts below apply to a fully upgraded weapon.

The Chemist is unlocked by reaching Level 10 with the Scientist. Each Level starting with 5, excluding 6, will reward the player with a single character piece until all are unlocked, at Level 10. If the player did not reach level 10 in Garden Warfare but plays Garden Warfare 2 they will be able to collect the missing stickers to unlock this variant.

The Chemist's objective is to take out clustered groups of plants, as his weapon deals massive damage up close to an area of plants. However, like the Zoologist, the weapon has an extremely short range, and only hits close range, so close range combat must be done.

Compared to the Marine Biologist, the Chemist does less damage to a target and a longer fire rate in exchange for area of effect. This makes the Chemist more versatile in certain situations, such as getting into gardens in Gardens & Graveyards. Taking on singular targets is still a good option, as 35 damage close range is still a good number to take out all but the bulkiest plants. Though if singular targeting is your style, the Marine Biologist is a better choice. If group damage is more important, the Chemist and the Zoologist are interchangable.

Although he is harmless at longer ranges, he will momentarily chase after you at medium range and will vanquish you in seconds. Fortunately, the Chomper's Burrow is insanely effective against the Chemist, but be very careful. Make sure he is at medium to longer ranges, and vanquish him as a Peashooter, a Cactus, or a Sunflower at longer ranges. 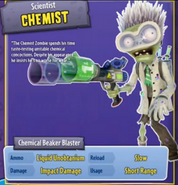 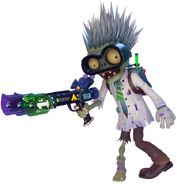 HD Chemist
Add a photo to this gallery 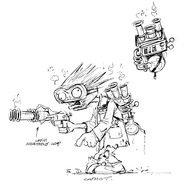 Concept art from The Art of Plants vs. Zombies
==Trivia==
*He is currently the only playable character that does not actually increase his weapon's damage when obtaining the damage increase upgrade.
**This is not true in ''Garden Warfare 2''.
*His primary weapon is similar to a Stubby Shotgun from the Grand Theft Auto series which also can do high damage in a point-blank range.
*He underwent several design changes in ''Garden Warfare 2'':
**The rim of his safety goggles is now black instead of white.
**His safety goggles are also no longer cracked, albeit he still wears them upside down.
**His weapon's beakers appear to have a cone-shaped barrel on each of them.
**His pants, shoe, and backpack straps appear to have a slightly brighter brown color.
Add a photo to this gallery