The Cheetos DLC update of Plants vs. Zombies: Garden Warfare was released on August 19, 2014, but was initially only accessible to some players. Players were to purchase specially marked brands of Cheetos which were exclusive to Target and were to redeem a code online to enable them access to the downloadable content (DLC). This content includes two new characters, Chester Chomper and Dr. Chester, as well as five new abilities for the Chomper and Scientist and their variants, such as the Cheesy Warp, Chesterweed, Cheesy Goop, Cheetah Heal Station, and Sticky Cheetah Ball. This promotion eventually ended on September 26, 2014. Eventually, due to many codes failing to work, it was finally decided that the characters were to be released for free to all players. 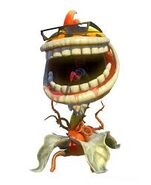 Dr. Chester and its upgrades

An advertisement for both Dr. Chester and Chester Chomper
Add a photo to this gallery

Retrieved from "https://plantsvszombies.fandom.com/wiki/Cheetos_DLC?oldid=2242630"
Community content is available under CC-BY-SA unless otherwise noted.