When this hurts the Plant Hero: Conjure a Gourmet card, and it costs 1

less.
Is that the exquisite scent of an aged Camembert, or just rotting flesh?
Cheese Cutter is a galactic super-rare zombie card in Plants vs. Zombies Heroes and a member of the

. He does not have any traits, and his ability Conjures a gourmet card, including another Cheese Cutter, every time he does damage to the plant hero and reduces its cost by 1

, unless the zombie hero already has 10 cards in their hand.

His name is based on the utensil of the same name, which is used for slicing cheese.

His design is based on a chef, a professional cook.

It may also come from a metaphor for farting as well as the phrase "Who cut the cheese?".

Is that the exquisite scent of an aged Camembert, or just rotting flesh?

zombie but he has a good ability that makes him worth using. In this case, it allows you to Conjure discounted gourmet cards but it requires damage to hit your opponent. Hence, you need to play alongside other cards, preferably on turn 2.

He's not good in aggressive decks since the cards you obtain might not help early enough to take the win. In tempo decks, he is great, as you are putting value onto the field and having cheaper cards to play can help you to get ahead of your opponent. He's also good in control decks, as you're forcing your opponent to decide on whether to let him hit them to charge their Super-Block Meter but letting you gain additional cards or wasting their small removals on him.

Cheese Cutter is a good pick in any Beastly deck, and each hero can use him well in their own ways:

For easy reference, here is the list of cards Cheese Cutter can Conjure and their cost change:

Since he Conjures a card if he hits the plant hero, he also works well with Dino-Roar cards.

Your opponent can get a huge card advantage if this stays on the field. He can be taken out easily on turn 1 by most plant cards. He can also be destroyed using a Banana Bomb unless he gets a health boost. But for most of the time, try to block Cheese Cutter with any plant as his ability only activates when he hurts the plant hero. You can also use Soul Patch to prevent his ability from activating, but beware of cards such as Locust Swarm which can easily destroy Soul Patch.

Due to his low strength and health, you may resort to instant kills like Whack-a-Zombie, Devour and Chomper

You may also want to get rid of environments that will activate his ability. These include Moon Base Z, Ice Moon and Laser Base Alpha 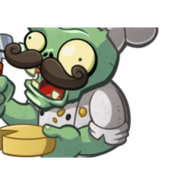 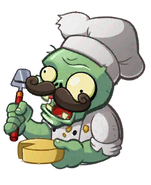 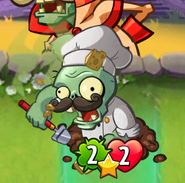 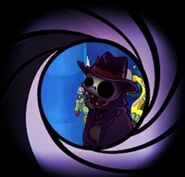