For more information about the character that this line is based on, see Hypno-shroom.

The Charm line (魅惑系; pinyin: mèihuò xì) was a Class A

All members of the Charm line had a name and ability that is a play on the word "Charm".

Beauty-shroom attacked zombies through love, essentially infatuating or "charming" them.

Hypno-shroom abilities in previous games involved hypnotizing zombies, psychically entrancing them by putting them into a hypnotic charm.

Talisman-shroom's name, attack, and design were based of a Daoist talisman a supernatural charm used to combat supernatural entities. 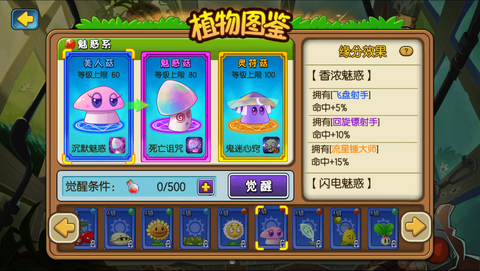 Abilities are unlocked by tiering up, while their effect was increased through star leveling.

After unlocking the Charm line, additional puzzle pieces could be used to upgrade it, which increased its stats and ability LVs.

Charm line stats would be increased if these specific plants were unlocked.