Not to be confused with Centurion character from the Garden Warfare games, or the Centurion medal from Plants vs. Zombies: Battle for Neighborville.

A higher grade of Roman Zombie.

Penny's Pursuit - Imperial Entanglements - Level 1
Did you know that in Ancient Rome, a centurion commanded a century? Isn't that wild?
Centurion Zombie is a zombie in Plants vs. Zombies 2 encountered in Penny's Pursuit. It is very similar to Knight Zombie, but is able to absorb 350 more DPS than Knight Zombie (who absorbs 1790 DPS), absorbing 2140 DPS total. Like the Knight Zombie, his galea can be taken by Magnet-shroom.

A higher grade of Roman Zombie.

Did you know that in Ancient Rome, a centurion commanded a century? Isn't that wild?

Like Knight Zombie, Magnet-shroom makes an very effective counter, reducing Centurion Zombie to a mere basic Roman Zombie. Be warned though, too many Centurions may prove overwhelming to Magnet-shrooms due to them needing to recharge.

Like all high-health zombies, taking him out with instant-kill plants such as Cherry Bomb or Primal Potato Mine is highly effective. However, his health is so dense that if your plants aren't at a high enough level, he will be able to absorb one whole instant-kill.

Slowing him down with chilling or stalling plants may give you time to plant a stronger plant, or for your instant-kills to recharge. 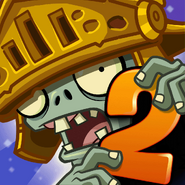 Centurion Zombie in the 2.5.0 icon 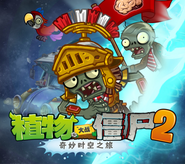