Super Rare
The Centurion Zombie is a legendary hero, and champion of countless battles. Or so he'd have you believe... The truth is, he bought his armor from a costume shop, his helmet is made out of an old broom, and his cape? Just some drapes he ripped off the wall.

Rare
The Centurion Zombie is a legendary hero, and champion of countless battles. Or so he'd have you believe... The truth is, he bought his armor from a costume shop, his helmet is made out of an old broom, and his cape? Just some drapes he ripped off the wall.

Not to be confused with Centurion Zombie from Plants vs. Zombies 2.

The Centurion Zombie is a legendary hero, and champion of countless battles. Or so he'd have you believe... The truth is, he bought his armor from a costume shop, his helmet is made out of an old broom, and his cape? Just some drapes he ripped off the wall.

The primary weapon of the Centurion is the Flame Bolt. It deals 12 (14 when upgraded) impact damage and 15 (17 when upgraded) critical damage close range.

At long range, it deals 8 impact damage and 9 (10 when upgraded) critical damage. It also deals fire damage on plants that are hit for 3x5 damage.

Without the constant threat of burnt fingers, the Centurion's reload speeds have been improved.

Dousing each piece of charcoal in liquid BBQ starter results in hotter shots, and more damage!

The Centurion's primary weapon is almost unique among Foot Soldiers as it does not fire rapidly if the trigger button is held. Rather, it fires a single shot whenever you press the button, similar to the Camo Ranger. The fire effect that the Flame Bolt possesses allows you to deal lots of damage to enemies if you keep hitting them with your shots. Strive for ammunition upgrades to make the Centurion a more versatile character, one that excels at mid to long range combat.

In Garden Warfare 2, adding specific character upgrades can make the Centurion lethal. With good enough range. Critical hits can make vanquishes much easier to get, especially with his fire effect his weapon possesses.

There are two ways of using Centurion: one is to fight in the front line like the regular Foot Soldier; the second is to snipe like a Camo Ranger. In comparison, Centurion performs worse than both of them in terms of ammo and recoil, but, in return, the fire ability rivals both.

If you use Centurion like a regular Foot Soldier, you should be extra careful when it comes into a 1v1 scenario. As your ammo and recoil come to a disadvantage, always check on your ammo clip, reload whenever possible, and utilize your abilities such as Rocket Jump and Zombie Stink Cloud. If your ammo runs short or all your abilities are used up, duck behind cover to reload before coming out for another fight. Never try to fight characters capable of dishing out large amounts of damage over time, such as Kernel Corn, in close quarters, and, as always, destroy rooted plants with ZPG instead of using your primary weapon.

Alternatively, Centurion in long range excels Camo Ranger in crowd control. Unlike Camo Ranger, Centurion can deal damage continuously as he is a fire variant. To maximize the efficiency of the fire damage, spending time to set the whole enemy team alight is recommended instead of focusing fire onto a single plant. Besides that, sniping Centurions should be played with a style similar to that of Camo Ranger.

Centurion can rain fire damage to and wreck havoc on your whole team if approached incorrectly. When you fight a Centurion as a powerful character in close quarters, fighting him alone is still a tact, as it will mostly result in a win anyway, in addition to minimizing the damage done to your teammates in case one is near you. Do not be overconfident, however, as being hit by a ZPG will be lethal unless you are playing as Iron Citron or Torchwood, who are already hard enough to obtain. Sunflowers are critical to fighting Centurions, as they can mitigate the fire damage done to their allies in numerous ways and can still be prepared for another fight. However, they should still take extra care, as they could become easy targets of Centurions due to their less-than average health.

Centurions, as mentioned above, should be treated as Camo Rangers at long range. Cacti are the best counters in such situations, as they can fight fire with fire (often quite literally) with the Centurions. Chompers should not try to attack Centurions if the former is at low ground, as they will mostly end up with getting vanquished, exceptions being able to land a hit with Chomp Cannon. 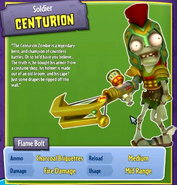 Centurion on the Legends of the Lawn billboard image