For the version in Plants vs. Zombies Heroes, see Cell Phone Zombie.

Cell Phone Zombie refreshes her feed feverishly, expecting that something called a "feed" has got to give her brainz. It only gives her "likes," however, which are more of a glassy taste.

Cell Phone Zombie is an Armored theater Zombie in Plants vs. Zombies 3, which you first encounter at Floor 6 of Devour Tower. She shields herself with her cell phone. Once her cell phone breaks, she will become enraged and will move and attack faster than before.

Her name is taken from the card of the same name from Plants vs. Zombies Heroes, but has a drastically different appearance than her namesake.

Her ability to rage once her cell phone is broken is a reference to Internet addiction disorder (IAD), a condition where a person is addicted to the internet.

This can be a dangerous zombie, so make sure to get rid of it as soon as you can. Its high damage without its cell phone can result in a highly damaged defense. Try to use fast attacking plants, as a slow attacking plant or a melee plant probably will get eaten by said zombie. 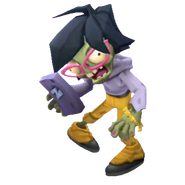 Unused design from the files

Cell Phone Zombie in a pop-up for a new update