For the version in Plants vs. Zombies 3, see Cell Phone Zombie.

When played: Draw a card.
Hang on - he's got to take this.
Cell Phone Zombie is a premium uncommon zombie card in Plants vs. Zombies Heroes and a member of the

. He does not have any traits, and his ability draws a card when he is played. His closest plant counterparts are Magic Beanstalk and Sage Sage.

His cell phone may be based on the DynaTAC phone, which is the first commercially available cell phone.

Cell Phone Zombie's main role is to help you thin out the deck and have a higher chance of getting more useful cards. He can also be used to activate Dino-Roar abilities cheaply. However, as he gives you no hand advantage at all while having very poor stats, it may be more preferable to replace him with Fun-Dead Raiser, Regifting Zombie, Kite Flyer, or Wormhole Gatekeeper, as they can draw cards more efficiently. Still, his stats do make a little sneaky use, namely blocking a powerful plant that would otherwise defeat you.

As Super Brainz or Huge-Gigantacus, try to Bounce him with Firefighter or put him in a gravestone via Mixed-Up Gravedigger so you can reuse his ability. However, only use Firefighter if there are no zombies with more useful abilities, as there are many abilities more useful than drawing a single card.

You can use almost anything to destroy this zombie, as he has the stats of a regular Zombie. However, the player must try to avoid Bouncing this zombie in order to prevent your opponent from drawing another card for just 2 brains. 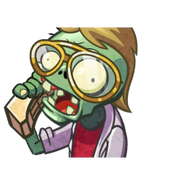 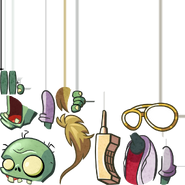 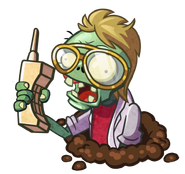 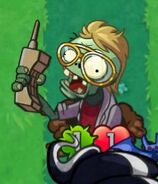 Cell Phone Zombie tinted gray due to a glitch

Cell Phone Zombie with the