When played in an Environment: Destroy a Plant with 2

. He does not have any traits, and his ability instantly destroys a selected plant with 2

or less when he is played in an environment.

He is based on a janitor (also known as a custodian), a person who cleans and maintains buildings such as hospitals, schools and residential accommodation.

His name is a combination of "celestial," referring to him being a Galactic Gardens card, and "custodian," another name for a janitor.

Don't call him a "Space Janitor." He's a "Celestial Custodian" and darn proud of it.

uncommon zombie is below average for just 3

. However, his ability may be useful as he can destroy a single plant with 2

or less, like Rolling Stone. While Celestial Custodian is more expensive, he serves as a 3

In fact, his ability can be considered a more useful Rolling Stone in some cases, due to the fact that it can destroy a plant before the Plants Play phrase. This means that his ability can destroy a dangerous plant already on the field such as Black-Eyed Pea before it can be boosted by your opponent. However, if you would rather prefer to destroy a plant during the zombie tricks phase with his ability, you can play him in Graveyard, which will reveal him in the zombie tricks phrase as well as activate his ability. However, it also puts him at a greater risk of Grave Buster, and if your opponent has Spyris, they can see that he has been played and then wait a turn to play their weak plants, wasting his ability. Also, this combo can only be normally done with Neptuna.

Speaking of Neptuna, she can use In-Crypted or Firefighter to reuse his ability, while The Smash can do so with Secret Agent. Rustbolt can use his ability to destroy a plant in the zombie tricks phase via Teleport or Teleportation Zombie.

As he is in professional tribe, he can be used to boost Zombie Middle Manager's strength if he gets hurt and be an Evolution fodder for Jurassic Fossilhead.

This zombie may possibly ruin your strategies if he is played in an environment, one of your low strength plants will be destroyed like Admiral Navy Bean, Wall-Nut, or Torchwood. The only counter to his ability is to keep your plants high in strength. As for the zombie himself, due to its otherwise poor stats, can be ignored, especially during the late game. Just keep in mind of its professional tribe synergy, which may be used to strengthen Zombie Middle Manager or to Evolve into Jurassic Fossilhead. 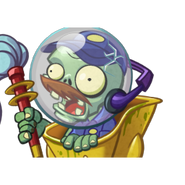 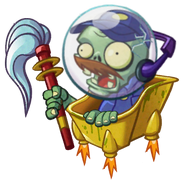 Celestial Custodian about to attack 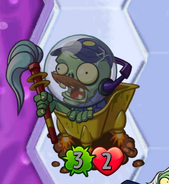 Celestial Custodian tinted gray due to a glitch 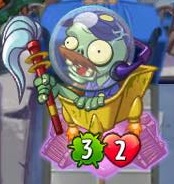