For the similar named zombie in the Chinese version of Plants vs. Zombies 2, see Cavalry Zombie.

Speeds through pathways on his wooden horse.

Qin Shi Huang Mausoleum - Level 2-1
Rides the wooden horse along the pathway, as if he is a soldier.

Charged the entire row of plants, dealing damage to them.

Given the fact that pathways are curved and cannot be planted on, Bruce Bamboo and Dandelion are some of the only effective plants against him. Neither of them have enough firepower to kill him, but one of these placed beside a lane will often deal enough damage for other plants to defeat him. 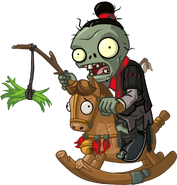 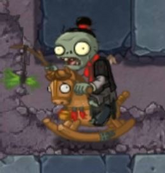 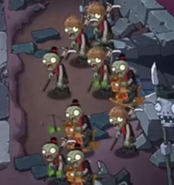 Cavalry Zombie with one hand

Cavalry Zombie Textures
Add a photo to this gallery

Retrieved from "https://plantsvszombies.fandom.com/wiki/Cavalry_Zombie_(PvZO)?oldid=2371793"
Community content is available under CC-BY-SA unless otherwise noted.