Dark Ages - Night 9
Cavalry Zombie is one of the few zombies who have pride and glory in his mind, so he does not allow others to know why he did become a zombie. And the reason is.... A famous zombie philosopher said: "Those who drown are the ones that can swim..."
Cavalry Zombie (骑兵僵尸; pinyin: qíbīng jiāngshī) is a zombie encountered in Dark Ages in the Chinese version of Plants vs. Zombies 2. He is a Knight Zombie riding a horse and carrying a lance. He jousts towards the player's plants and launches his rider off his back once he approaches a plant, similarly to the Zombie Bull. The Knight Zombie will also leave his lance upon doing so and the lance itself will behave like a tombstone, which instantly kills the first plant in where it is placed, similar to the Surfer Zombie's surfboard. He is an environment modifier.

The Knight Zombie wears a knight helm for protection against threats. Rather than wearing a full knight gear, he wears a standard peasant outfit instead. He holds a lance on his left hand and once he is launched by his horse, he will stab a certain plant while the Knight Zombie performs a unique jumping animation. His horse is black, has blue-green colored hairs and a tail on him, and has pink banners on his rear and front legs with red linings. The rear one holds a brain logo on while on his front legs, and three black circle spots exist on him.

This is a very dangerous zombie. When he appears, plant a Puff-shroom, Thorns, Sun-shroom or any other cheap plant that you have unlocked to slow him down. You can also use freezing and stunning plants, such as Iceberg Lettuce, or a Kernel-pult. As his Knight Zombie gets launched, there will be a lance placed on a tile on your lawn. The tile cannot be planted on unless he is destroyed, and can absorb hits just like Surfer Zombie's surfboard. Be sure to use a Magnet-shroom near a Tall-nut, because knight helmets are harder to destroy than buckets. If combined with Jester Zombies, Zombie Kings, Wizard Zombies, and Dark Ages Gargantuars, they can be very problematic across your defenses, causing massive destruction on your lawn. His zombie horse can start eating your plants, much like the Zombie Bull in Wild West. You should have plants like Fume-shrooms, Tall-nuts, Coconut Cannons, Snapdragons, Laser Beans, or Starfruits at your disposal to prevent massive destruction from happening.

If you have a very solid defense, however, place a Puff-shroom on the 8th column to make him launch his Knight Zombie early.

Do not let this zombie throw his Knight Zombie inside your defenses or you will lose very quickly, because the Knight Zombie is extremely difficult to destroy without instant kills, especially if he gets thrown to the hindmost lanes. However, you can counter him with a Hurrikale when he is in the air, if you time it right, he’ll get thrown out very early, but don't worry if you didn't manage to blow him away. It is suggested that you can use a Hypno-shroom on the Knight Zombie, so that the Knight Zombie can eat the horse as his health is higher than his horse.

Also, note that Blover doesn't blow away the Knight Zombie when he is airborne, but a Hurrikale will if placed in the same lane. 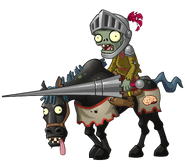 Cavalry Zombie launching a Knight Zombie in an advertisement

Cavalry Zombie's sprites with other sprites