For the one in Plants vs. Zombies: All Stars, see Great Wall Catapult Zombie.

Lob basketballs at your plants

Of all the things Catapult Zombie could launch with his catapult, basketballs seemed like the best and most obvious choice.

Catapult Zombie could launch anything with the catapult, but meat loaves seemed like the best and most obvious choice.

Catapult Zombie is a zombie in Plants vs. Zombies that rides a vehicle that rolls onto the player's lawn (or roof), crushing plants and occupying the first two columns from the right. It then stops its vehicle and starts lobbing basketballs at the last plants (closest to the house, or the chimney on the roof) in its lane. Once this zombie kills a plant, it moves forward slightly and continues attacking the next plant. When it runs out of basketballs or if it kills all the plants in the lane, Catapult Zombie drives towards the player's house in a fashion similar to that of a Zomboni. In the process, its vehicle will squash any plants it comes into contact with, except for Spikeweed, Spikerock and any instant-kill plant other than Chomper in its chewing stage which destroys it instantly. It is the 22nd zombie encountered in Adventure Mode.

Use a Spikeweed or Spikerock to pop the tires. If you do not have one available, use Umbrella Leaves to knock the basketballs out of the way while your offensive plants take care of it. Using Umbrella Leaves to protect your plants from the basketballs is key when you encounter Catapult Zombies on roof levels, as you cannot use Spikeweed and Spikerocks in any roof level. This is also a good idea if you have any expensive plants like Twin Sunflowers or Cob Cannons in the back. Keep in mind that if you plant a Spikeweed or Spikerock beneath the back tire of the Catapult Zombie's vehicle, it will not kill it. You also should not plant any non-instant kill plant other than the Spikeweed or Spikerock in the first two columns to the right if there are Catapult Zombies in the level because it will kill them when it's approaching. In Survival: Endless, the Umbrella Leaf is a must because any Spikeweeds or Spikerocks you have previously planted will quickly be destroyed by the hordes of stacked Catapult Zombies, Zombonis, and Gargantuars. Magnet-shrooms are useless against it, even though the machine is made out of metal, but you can use chilling plants such as the Snow Pea, Ice-shroom, and Winter Melon to slow down the Catapult Zombie. This wouldn't work against Zombonis. Also, if you don't have an Umbrella Leaf you could also use a Wall-nut or a Tall-nut behind your Sunflowers, so the other plants can focus on killing the Catapult Zombie.

Note: Pumpkins are useless for directly defending plants against it because Catapult Zombies aim for the plant inside the Pumpkin first before they go for the Pumpkin.

Catapult Zombie is one of your best bets for taking out opposing Sunflowers. He is one of the few zombies who specialize in attacking the leftmost columns, which most zombies will have a hard time doing - and since two Sunflowers are pre-planted on the first column in this mode, most players will instinctively place the rest there as well.

It is advised to defend your Catapult Zombies for as long as possible so they can clear out your opponent's rear defenses. Keeping your catapult functional until the zombie runs out of basketballs is especially desirable, as the zombie will then proceed to mow down the plants in front of it. For this reason, Catapult Zombie is one of the best units to pair Trash Can Zombies with, though other durable zombies like Buckethead Zombie and Football Zombie are also good choices.

Avoid pairing him with Bungee Zombie as that is a major incentive for your opponent to pick Umbrella Leaves.

Umbrella Leaves and the Wall-nut/Tall-nut strategy listed above are key for guarding your defenses against Catapult Zombie in this mode. If you do not have any of these plants in your arsenal, you will have to avoid placing Sunflowers and any plant with a high sun cost and/or slow recharge in the rear. In this case, putting such plants in the middle is optimal.

As Catapult Zombies remain in the zombie player's zone while launching basketballs, Spikeweeds and several instant kills like Potato Mine and Cherry Bomb are poor options as the zombie will be beyond their reach. Instead, Jalapeno is your best bet for taking them down quickly.

It is also advised to end the match as soon as possible - Catapult Zombies are especially deadly in Sudden Death because at that point you cannot replace the Sunflowers they destroy.

HD Catapult Zombie without the catapult

Catapult pole with a basketball

A Catapult Zombie about to get killed by a Cherry Bomb

Catapult Zombie on a modded I, Zombie area 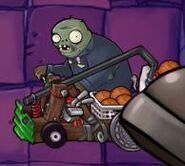 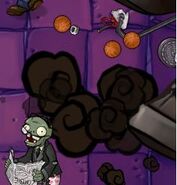 The catapult pole's first degrade with a basketball on it 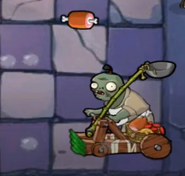 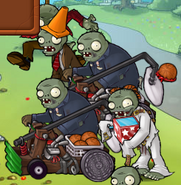