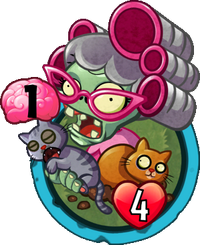 this turn when you play a Pet.
The cat on the left is a Z-Tube celebrity.
Cat Lady is a premium super-rare zombie card in Plants vs. Zombies Heroes and a member of the

. She does not have any traits, and her ability gives her +3

every time a pet card is played, but only for the turn it is played.

In the Boss Battle of the mission Zombies on Ice!, Brain Freeze starts with a Cat Lady on the third lane.

In the mission KO at the OK Arcade, the player starts with a Cat Lady on the first lane in every battle except for the Boss Battle, in which the Cat Lady is on the middle lane.

She is based on the "cat lady" stereotype, which is most often used to refer to elderly women who own a large number of cats, specifically Eleanor Abernathy, better known as the "Crazy Cat Lady," in The Simpsons.

The "Z-Tube" mentioned in her description is a parody of the online site YouTube. Her description also references the many cat videos that are on YouTube, and how cat videos are popular and often associated with YouTube.

The cat on the left is a Z-Tube celebrity.

Cat Lady on her own is useless, as she has no strength points. While her high health ensures survival for a few turns, that alone is not enough. Cat Lady, however, really shines in a pet deck, as she gains a massive amount of strength per pet played and will be able to hit whatever is in front of her really hard. However, the downside is that the strength boost she gains lasts for only one turn, so you'll have to play some more pets on the next turn if you want the heavy hitting to continue. So don't play too many pets in one turn, and be sure to finish the game early with Cat Lady, as the Beastly class is terrible in terms of card draw, leaving you in a situation where Cat Lady cannot serve as a fighter anymore due to the lack of cards if the game drags on. Boosting her base strength so that Cat Lady can attack on her own without the help of her ability somewhat alleviates this problem.

Brain Freeze can boost Cat Lady much more easily, as two of his superpowers, Frozen Tundra and Dolphinado, are both pet tricks. He can play either of the tricks to both hamper plants and give a boost to Cat Lady. He can also use Bouncing cards such as Pogo Bouncer to remove any plants blocking her so she can land a hit on your opponent. The

Sneaky class having lots of pets on its own is also a bonus. Immorticia's

Brainy class may not have good pet cards for a pet deck unlike the Sneaky class, but it does have plenty of card drawing options, supplying Immoriticia with many pet cards for many turns. Keep in mind that her signature superpower, Witch's Familiar, will boost Cat Lady twice, once for the trick being played and once more when the Zom-Bats are made from it, giving it a whopping 6+ strenght boost

Here's a list of pet cards for easy reference:

If Cat Lady is on her own and no pets are played after, you can either ignore her and build your own defenses, or engage in combat without harm to destroy her before it gets too late. (Some opponents may play her on turn 1 to maximize the damage output on turn 2.) Should Cat Lady's strength boost become too much to handle, consider blocking the attack with a cheap, expendable plant rather than removing her (unless she has received lots of base strength too), as the strength boost is temporary and will go away the next turn. If you can, you can use shielding cards as well to neutralize the attack instead of sacrificing the plant.

If you are playing as Rose, beware playing Goatify if there Cat Lady is on the field, as she will still gain more strength due to Goat being a pet. But if Cat Lady is the zombie with the highest strength, and there aren't any other Cat Ladies or Zookeepers on the field, then feel free to play it.

Retrieved from "https://plantsvszombies.fandom.com/wiki/Cat_Lady?oldid=2363459"
Community content is available under CC-BY-SA unless otherwise noted.