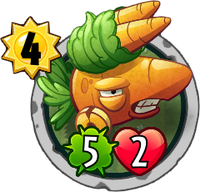 For the version in the Chinese main series games, see Carrotillery.

None
His artillery is a rich source of vitamin A and beta-carotene - a fact the Zombies do not seem to appreciate.
Carrotillery is a premium uncommon plant card in Plants vs. Zombies Heroes and a member of the

. He has the Team-Up trait and does not have any abilities.

He is based on the plant in the Chinese version of Plants vs. Zombies 2.

His name is a portmanteau of "carrot," the real-life plant he is based on, and "artillery," referring to his missiles.

His description references the fact that carrots have high quantities of vitamin A and β-carotene.

His artillery is a rich source of vitamin A and beta-carotene - a fact the Zombies do not seem to appreciate.

Carrotillery is an incredibly powerful plant that packs a powerful punch to the zombies or your opponent. He acts like a Shellery with higher stats, so use it as you would use Shellery. However, his health is still rather low and as such, he is still very vulnerable to many tricks. This flaw can be fixed by playing cards like Grow-Shroom to increase his health or to make use of his Team-Up trait and play Carrotillery behind another plant. Naturally, it is best to use this plant against high-health zombies like Smashing Gargantuar, Cat Lady, Newspaper Zombie, Overstuffed Zombie, Zombie King, and Jester. You can also use Brainana to prevent Carrotillery from being easily destroyed from tricks.

Because he is a root plant, he can synergize with Starch-Lord. However, this combo is only allowed by Citron and Beta-Carrotina. Speaking of

Smarty, Red Stinger, when placed behind a plant, has better stats at the same cost, and can also serve another function, and if you team them up you can tally up to 12 damage to the zombie hero, but it is too expensive.

Although he is a very powerful plant, many zombies can destroy him in one attack due to his low health, making him easier to deal with when placed alone. However, his Team-Up trait means that your opponent usually is most likely going to play him behind a tougher plant. Therefore, playing a damaging/destroying trick such as Rocket Science, Cut Down to Size, or Bungee Plumber is a good idea, as they can bypass the plant in front of Carrotillery. You can also play Beam Me Up to easily destroy Carrotillery if he is not protected. Hot Dog Imp is also a cheap and effective choice due to his

Strikethrough trait, hitting Carrotillery and destroying him, even if he is behind another plant. However, do remember that Space Cadet and Hot Dog Imp will be destroyed unless their health is over 6 or they are shielded. 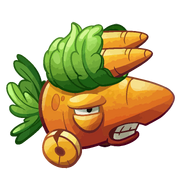 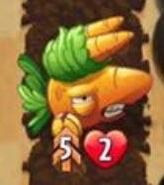 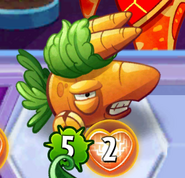 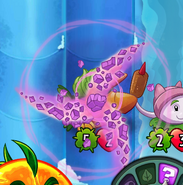 Cut Down to Size being played on Carrotillery 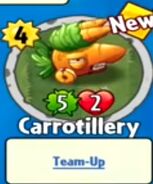 The player receiving Carrotillery from a Premium Pack before update 1.2.11

Carrotillery on the advertisement for the Rose Ally Pack, note how it has only one missile