For other uses, see Carrotillery (disambiguation).

Fires a missile to hold back zombies, causing damage in an area when the missile explodes

In spite of Carrotillery always hesitantly shouting "Danger!" to the point of exhaustion, zombies still excitedly eat the missiles it fires, perhaps the zombies should consider going vegetarian.

Carrotillery (胡萝卜导弹车; pinyin: húluóbo dǎodànchē) was a premium plant which was formerly obtainable in Plants vs. Zombies: Journey to the West. They fired rockets towards zombies, dealing explosive damage.

For more information about this character, see Carrotillery.

In Plants vs. Zombies: Journey to the West, He was a store-bought plant which could be purchased with 180 gems and couldn't be imitated. He fired carrot missiles at zombies which dealt the same amount of damage as a pea, rather than the heavy damaging carrots he fired in the Chinese version of Plants vs. Zombies 2, but don't have to recharge as a result.

Due to the lack of Plant Food in this game, his plant food ability is instead a secondary ability that can sometimes occur, firing a large carrot missile to the ground, which deals a large amount of damage in a 3x3 area when it is destroyed.

Plants vs. Zombies: Journey to the West (Archived content)

In spite of Carrotillery always hesitantly shouting "Danger!" to the point of exhaustion, zombies still excitedly eat the missiles it fires, perhaps the zombies should consider having a fast.

This plant was extremely useful due to it being an upgraded Peashooter with the ability to launch protective Explode-o-nuts. Those missiles couldn't be planted on, but they could land on an occupied tiles, as well as on the top of Carrotillery himself. However, Hero Plants were always above any projectiles, so they couldn't be protected by his rockets. Another thing to consider was his very slow recharge and inabilty to be imitated, so a faster recharging plant or a damage dealing Hero Plant was required.

Whilist his normal shots were hitting the Roof like any other straight-shooting plants', his rockets were launched in an arc, allowing him to help from behind. If you wanted to deal damage with his normal shots as well, you needed to plant him on lane 5 or closer and protect him with Wall-nuts or Tall-nuts.

He wasn't very useful in water stages, like Pool or War of the Spider Woman, since his rockets couldn't land on water or Lily Pads, therefore a different strategy was required. 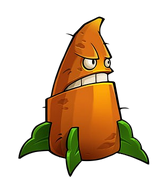 Carrotillery in an advertisement with Snapdragon, Dandelion, Pomegunate, Laser Bean and Bonk Choy 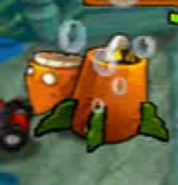 Carrotillery about to fire a large missile 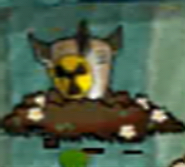 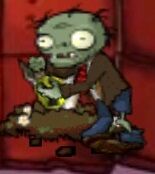 Missile on top of Pomegunate

Retrieved from "https://plantsvszombies.fandom.com/wiki/Carrotillery_(PvZ:_JttW)?oldid=2371917"
Community content is available under CC-BY-SA unless otherwise noted.