For the plant in Plants vs. Zombies 2 (Chinese version), see Carrotillery.

Carrot Rocket (胡萝卜火箭; pinyin: húluóbō huǒjiàn) was a plant in Plants vs. Zombies Online. It was obtained in Qin Shi Huang Mausoleum, and it would shoot carrot missiles which aim for the last zombie in the lane. This plant was meant to deal with Archer Zombie, as it changed its target immediately to Archer Zombie if it was on the lawn. It took 4.8 seconds to reload.

When given Plant Food, Carrot Rocket shot out rockets which dealt huge damage to the zombies they hit.

It would attack 3 random targets with its Plant Food rockets.

Although it was not a very powerful plant on itself, it was highly recommended to choose this plant when Archer Zombie appeared, as it will not move and stay at the back when there are plants on its lane. Even more, this zombie could attack from a far distance, making it well protected. Carrot Rockets would always target the backmost zombie, so a Carrot Rocket behind Wall-nut combo would have been extremely useful against Archer Zombies, preventing them from killing the plants easily. 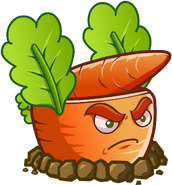 Carrot Rocket in the inventory

Carrot Rocket sprout, can be used in Zen Garden to give loots

Carrot Rocket on the map

Carrot Rocket about to attack an Archer Zombie 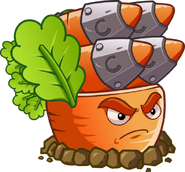 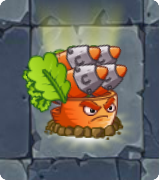 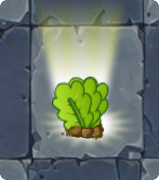 Its projectile
Add a photo to this gallery

Retrieved from "https://plantsvszombies.fandom.com/wiki/Carrot_Rocket?oldid=2155582"
Community content is available under CC-BY-SA unless otherwise noted.