View source
watch 02:56
Raise a Floppa - The Loop
Do you like this video?
Play Sound
File:Carnie Imp Twins.png

Two imps are generously provided for the price of one.

(can shrink Imps to oblivion)

(devouring them does not cause them to split)

(dragging them down doesn't cause them to split)

(causes them to faint when eaten)

(can knock them off the lawn)

Thymed Events - Backyard Big Top - Level 7
They're not actually twins, though they are identical.
Carnie Imp Twins are a pair of Imp zombies in Plants vs. Zombies 2 encountered in the Backyard Big Top Thymed Event. They act as one zombie until enough damage is done to them, causing them to split up in adjacent lanes. They can also be thrown by a Strongman Gargantuar when below half-health.

Two imps are generously provided for the price of one.

They're not actually twins, though they are identical.

Carnie Imp Twins are not that threatening when they come alone, but will be more difficult to deal with if a horde of them coming. Using Threepeater might be a good choice, as it can damage them directly and even when they split to adjacent lanes. Combining Phat Beet with Pumpkin on areas surrounding Carnie Imp Twins is a very good choice when there are hordes of Carnie Imp Splits.

It will be tougher to deal with if they're thrown by Strongman Gargantuar, especially since when they split the Imps land a tile forward, but you can simply knock them back if you have Primal Peashooters on columns 1-2. You can also use some of the weaknesses mentioned above to deal with them.

Do note that if it is defeated by or with effects, the Imps that split from them will carry said effects (e.g. poisoning).

In case of emergencies, you can use Plant Food on plants with a 3x3 area of damage (e.g. Bonk Choy), Electric Blueberry (provided there are only the Carnie Imp Twins on the board), Citron or Caulipower to throw them away without causing it to split.

It will not split if eaten, such as by Chomper, Toadstool or Olive Pit. 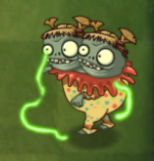 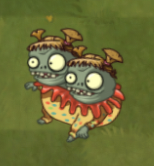 A lot of Carnie Imp Twins and Splits