Advances to a set spot on the board, then tosses buffing brains at other zombies until he's chased away or retreats on his own.

Arena - Electric Peashooter's Tournament.
Cardio Zombie is all about health, healthiness and healthy lifestyles. He refuses to consume carbs, downing nothing but high-protein brains for every meal. In his opinion, other zombies really need to up their game. NO EXCUSES!
Cardio Zombie is a zombie that can only be found in Arena and Penny's Pursuit in Plants vs. Zombies 2. He will advance to the 7th column when spawned and will crush any plant with his treadmill. After reaching the 7th column, he will throw brains at his fellow zombies, significantly increasing their health and speed. After a while, he will leave the lawn.

He is immune to the following effects:

Advances to a set spot on the board, then tosses buffing brains at other zombies until he's chased away or retreats on his own.

Cardio Zombie is all about health, healthiness and healthy lifestyles. He refuses to consume carbs, downing nothing but high-protein brains for every meal. In his opinion, other zombies really need to up their game. NO EXCUSES!

Cardio Zombie is a major threat as he will boost other zombies, making them even more dangerous. Since Cardio Zombie has an extremely high amount of health, he will reward a lot of points in Arena.

He also does not eat plants as he will crush them with his treadmill, meaning plants like Chili Bean and Sun Bean are useless against him. He can also crush underground plants such as Spikeweed, Cactus, and instantly destroy the Spikerock.

Also, not only Cardio Zombie himself but the buffed zombies who have received his buffed brains are also immune to Imp Pear's Plant Food.

Depending on your Arena league, defeating Cardio Zombie may or may not be possible regardless of your plant's levels. In lower leagues, Squash is a viable response, but in higher leagues, Cardio Zombie has too much health to be able to be defeated.

Try to use Kernel-pult to stun him and place the plants that deal continuous damage under him like Pokra, Bonk Choy to defeat him as soon as possible before he leaves.

Using Explode-O-Nut/Explode-O-Vine can be useful for defeating him, as when planted under him will instantly explode, and ~4 of these should be able to defeat him on the first rounds, when combined with plants like Celery Stalker or Pokra. Levelled up squash (3+) can also work similarly as she is invincible if she has picked a target.

Boosting Bowling Bulbs can seriously damage him, and its possible to hit it multiple times if there is a large enough crowd.

When combining multiple of these Cardio Zombie will be taken down easily.

Step 1: Go to an Arena Practice (preferably Goo Peashooter's Tournament Practice) that has a Cardio Zombie in it.

Step 2: Choose plants such as Moonflower (only if you aren't playing the Goo Peashooter Tournament Practice), Kernel-Pult, Squash, Celery Stalker, Bonk Choy, and/or Guacodile (if you have it, you can use Parsnip instead of Bonk Choy and/or Guacodile).

Step 3: Plant 2 or 3 Kernel-Pults on the third row, then wait for a Cardio Zombie. When he arrives, plant a Celery Stalker behind him, a Bonk Choy just in front of him, and several Guacodiles on him.

Step 4: He'll be defeated after a while. Do this with the other 2 Cardio Zombies in that Arena Practice.

Tip: Bonk Choy's, Parsnip's, Guacodile's, and Kernel-Pult's Plant Food effects are very helpful. Mastery Threepeaters combined with a napalm Torchwood along with a Tile Turnip will eliminate the threat quickly. Remember to make sure there is enough sun and no Jesters or Excavator Zombies to block the peas.

Note: This strategy is most likely to help you defeat Cardio Zombie in Goo Peashooter's Tournament Practice. 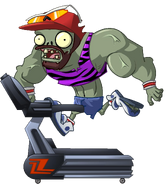 Cardio Zombie in an ad

Three Cardio Zombies in an ad via main menu 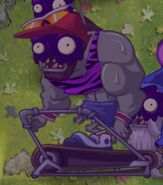 Cardio Zombie about to throw a brain

A brain used by Cardio Zombie to boost zombies 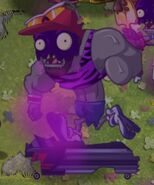 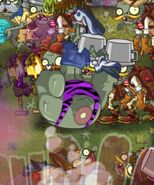 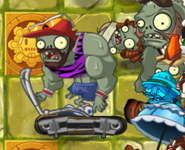 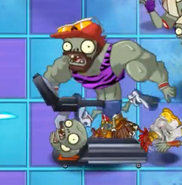