On Again, Off Again
This game mode is not always available to be played in-game. It is only available sometimes. It is currently available.

Not to be confused with Taco Bandits.

Capture the Taco is a limited-time game mode in Plants vs. Zombies: Garden Warfare 2 that was added in the Capture the Taco DLC along with new Torchwood and Hover Goat-3000 costumes. The goal of the mode is to get the most Tacos before the time runs out. Unlike Taco Bandits, plants can now capture tacos, and zombies can now defend their own tacos. If a match is tied at the end of the game, the match will continue in a sudden death overtime, similar to Gnome Bomb. This mode can be played on 5 total maps currently, those being Backyard Battleground, Zen Peak, Colizeum, Lunar Landing, and Frontline Flats.

The name and mechanics of this game mode is based on the "capture the flag" game mode commonly found in shooter games.

Players start the round on their side of the map. Once the game begins, the teams have eight minutes to capture as many tacos as possible while still defending their own. To capture a Taco, simply walk into it (it will be positioned in many different places, depending on the map). Tacos have circles around them that disable abilities, so be careful. If you successfully pick it up, you will receive a slight speed boost and get a red aura notifying players you are the Taco holder. In order to score a point for your team, you must return it to the taco return point, which will have an icon pointing to where it is. Doing this will give you a large amount of XP. Unfortunately, like Gnome Bomb, while carrying the Taco you are unable to use your abilities.

However, if you are vanquished while carrying the Taco, it is considered "dropped" and you will have to hope a teammate can pick it up and finish the task. The opposing team, though, may reset the Taco's location by going up to it and holding the interaction button for some time. That will relocate the Taco back to its starting point near the spawns.

Whenever a Taco is captured, it will either relocate itself to where it originally was, or it will spawn in a different part of the map.

At the end of the round, whichever team captured more tacos wins the round and each player on the winning team receives five Rainbow Stars as a reward. The losing team's players will get three Rainbow Stars each. 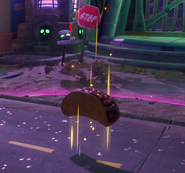 The event timer in the Backyard Battleground during Capture the Taco

Retrieved from "https://plantsvszombies.fandom.com/wiki/Capture_the_Taco?oldid=2370245"
Community content is available under CC-BY-SA unless otherwise noted.