Primary weapon is a spray

Super Rare
"One starry night when gazing from the crow's nest, Captain Squawk heard the coughing of a seagull ill of scurvy. The disheveled bird offered to join the crew in exchange for a lifetime supply of spoiled fish. They've been best mates ever since."
Captain Squawk is a Super Rare toxic variant of Captain Deadbeard in Plants vs. Zombies: Garden Warfare 2, who was added in the Frontline Fighters DLC. His close range weapon, the Flem Thrower, has unlimited ammo and acts like a toxic spray, similar to the weapon used by the Toxic Chomper. His long range weapon, the Gull Blaster, has 1 ammo per clip but can do big damage, similar to the Tank Commander, Iron Citron and Camo Cactus. As with most toxic variants except Druid Rose and Sanitation Expert, Captain Squawk has an aura that damages any nearby plants over time.

"One starry night when gazing from the crow's nest, Captain Squawk heard the coughing of a seagull ill of scurvy. The disheveled bird offered to join the crew in exchange for a lifetime supply of spoiled fish. They've been best mates ever since."

Captain Squawk excels in long range. His Gull Blaster does 39 upon impact and 46 for a critical, which is powerful. However, you must remember that he only has one bullet, so accuracy is very necessary. It is wise to shoot from afar and hide when reloading since the plants might realize where you are shooting from and run away or attack. Apparently, this makes him the most skill-based variant out of all Captain Deadbeard's variants so far.

Captain Squawk also has his short ranged weapon, the Flem Thrower, which deals 7 damage. The Flem Thrower is weak so it is wise to use it in certain situations to finish off a weak plant or a low health plant or use it to clear objective points. For this reason, it is best to do several "quick-scopes", by zooming onto the plant and quicky firing the bullet, then repeating until it is vanquished. This proves to be more efficient and reliable due to damage and lack of overheat.

If you see one, it is wise to take him out since he can be dangerous at long range. In close range, however, he is not that much of a big threat since his Flem Thrower is weak, though he still has Barrel Blast to take care of that disadvantage. 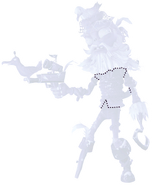 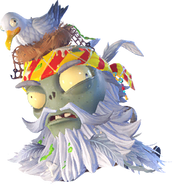 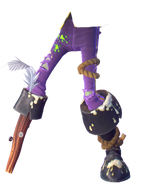 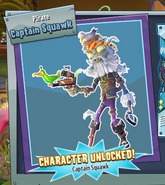