His first appearance is in a mission where the plants need to retrieve a present Crazy Dave was going to give to Dave-bot 3000.1. However, when the plants open the present, Captain Smasher appears from inside of the present. Crazy Dave then says that he got Dave-bot 3000.1 a 'large crusty pirate', who then says that he wanted a 'large crusty pie.' He can only be fought solo in the Boss Hunt mode.

Cannon Slam: Captain Smasher will slam down his cannon, dealing 40 damage to plants along with knockback. He can also ram at a plant with this attack.

Cannon Ball: Captain Smasher's ranged weapon, he will shoot lobbed cannonballs from afar. They deal 25 damage on impact and 30 on critical.

Pirate Summon: His fist glows blue and then he spawns 3 Conehead Pirates to attack the plants.

Like Royal Hypno-Flower, Captain Smasher relies on his curse to stop plants from attacking him. You need to vanquish the Cursebearers before the timer runs out. If they are not vanquished within the time limit, you will be instantly vanquished. Vanquishing all of the Cursebearers will revive any teammates that are down, so reviving teammates isn't a priority when the Cursebearers appear.

You may need to have AIs to help you. Sunflower, Rose, Kernel Corn, and Chomper are a great way of defeating it. Rose can use its Time Snare to slow it down, Sunflowers can heal, the Chomper can eat the Cursebearers quickly and the Kernel Corn can do mass damage. The player being an Agent Pea is also advised. Agent Pea, being a Peashooter variant, can Hyper quickly to the Cursebearers, and take them down easily because he is not a splash damage variant, and can get critical hits that deal extra damage. Also aim at their legs so you do not have to wast time destroying their armour.

If you have unlocked it Torchwood can be very good as you can use smouldering madness to reach the cursebearers and then deal a lot of damage to them very quickly, however the Trials of Gnomus are very difficult and time consuming

Keep in mind that Rose variants are not able to damage the Cursebearers, so having a group of Roses to tackle this boss is not advised.

Captain Smasher with other zombies on a stone mural

Cutscene. Note that Captain Smasher is poisoned from toxic aura. 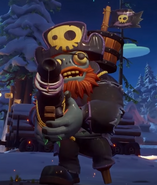