Super Rare
Captain Sharkbite is a Super Rare variant of Captain Deadbeard in Plants vs. Zombies: Garden Warfare 2. H​e wears a red pirate outfit and is covered in marine objects. Similarly to the other variants, Captain Sharkbite has two primary weapons: the Shark Laser for long range, which has a slower rate of fire than the normal Spyglass Shot, but does more damage and has splash damage in return, and the Snappy Shark for close range, which fires much faster and only consumes one ammo but does less damage.

"Captain Sharkbite is crusty, even by Deadbeard's standard. I mean, come on! He's covered in seaweed! You're embarrassing yourself, Sharkbite."

"Hold and release zoom to switch between a bitey shark, and a long-range laser!"

The primary weapons of Captain Sharkbite include the Snappy Shark, used when hip firing, and the Shark Laser, which is used when aiming down the sights. Each weapon only uses 1 ammo when fired. The Shark Laser fires slower than the Spyglass Shot, but deals more damage and has less recoil. The Snappy Shark does small amounts of damage, but can be fired much faster than other Captain Deadbeard variants' close range weapons.

Captain Sharkbite is a very powerful sniper class, despite his slower rate of fire. His Shark Laser weapon has an incredibly fast projectile that does a high amount of damage on headshot or body shot, with a helpful addition of splash damage. Many long range plants will try to attack you since your damage is very high and threatening to any plant player that isn't behind cover at all times, so exercise caution as you play as Captain Sharkbite, and make use of his abilities such as Barrel Blast and Cannon Rodeo to keep yourself protected against most close range threats. Captain Sharkbite is also the only Deadbeard to have a close range weapon that only takes one ammo, so if the situation calls for it, you will not be in danger of losing ammo too quickly and your close range weapon also has an incredibly high fire rate as well, but much lower damage.

Captain Sharkbite is a very dangerous opponent, priority should be put on him above all else if you're playing as a long ranged class, as he will decimate your team as they move up to the graveyard to capture or when they try to defend the garden. If you're not in a suitable position to deal with Sharkbite, stay behind cover at all times until your snipers defeat him, his weapon deals very high amounts of damage with ease, so exercise caution at all times if you plan to go out in the open against this dangerous threat. Try to catch him while he is busy with Chomper's Burrow ability for a quick vanquish. 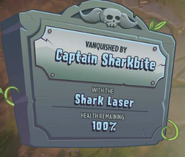 The player getting vanquished by an AI Captain Sharkbite in the Backyard Battleground.

Captain Sharkbite in a customization booth

Knex figure
Add a photo to this gallery

Retrieved from "https://plantsvszombies.fandom.com/wiki/Captain_Sharkbite?oldid=2242134"
Community content is available under CC-BY-SA unless otherwise noted.