Legendary
With a name like Captain Partyman, you know he's down to get funky. You wouldn't think it by looking at him, but he can spin on his peg leg for almost an entire minute, uninterrupted.
Captain Partyman is a Legendary variant of Captain Deadbeard in Plants vs. Zombies: Garden Warfare 2. Like all Party variants, he has the Legendary ability "Party Time!", that gives Captain Partyman a temporary speed and damage boost when the Party Time! meter fills up. Like all Legendary variants, only two stickers are required to unlock him.

However, like other party variants, Captain Partyman cannot be obtained through sticker packs, but instead, the player must open Infinite Infinity Chests in Infinity Time until they unlock him, meaning the player must get at least 25,000 Time Shards or more.

With a name like Captain Partyman, you know he's down to get funky. You wouldn't think it by looking at him, but he can spin on his peg leg for almost an entire minute, uninterrupted.

Captain Partyman is a bit weaker than his stock counterpart, he will take a few more shots to kill compared to Deadbeard, but he is very rarely in harm's way, meaning that your "Party Time!" mode will be far easier to achieve, and the increased damage is very welcome as a sniper.

Play this variant as you would with Captain Deadbeard, but try to plan your "Party Time!" to when you will get the most use out of it in a situation where increased firepower is required to defeat the plants.

Captain Partyman is arguably the weakest Zombie Party variant when compared to the others, but not by much. His damage is slightly decreased over his vanilla counterpart, and the speed increase he gains isn't necessary for a sniper unless he is in a bad situation, meaning that "Party Time!" will rarely be used to its full effectiveness for Captain Partyman.

As with most Deadbeards though, don't let him survive for too long, as he will a problem to your team while they try to advance. 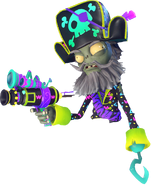 Captain Partyman in the customization booth 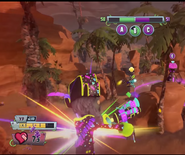