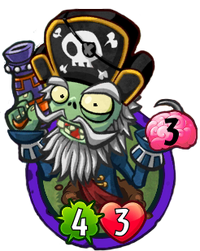 None
Yo ho ho! It's a pirate's unlife for him!
Captain Deadbeard is a token zombie card in Plants vs. Zombies Heroes and a member of the

Crazy class. He is made by Barrel of Deadbeards. He costs 3

He is based on the zombie class in Plants vs. Zombies: Garden Warfare 2 with the same name and appearance.

His description references the "Pirate's Life for Me" song from Pirates of the Caribbean.

Yo ho ho! It's a pirate's unlife for him!

But the best counter is not to touch any Barrels of Deadbeards, as the main way of having Captain Deadbeard out on the field is by destroying said zombie.