The Captains Deadbeard—pirate zombies accompanied by robotic, heavily armed parrots—are the embodiment of shivered timbers.
Captain Deadbeard is a playable zombie class in Plants vs. Zombies: Battle for Neighborville. He is a

Defend class who specializes in long-range attacks, via either his Spyglass Shot sniper weapon or through his aerial Parrot Pal drone. His Cannon Rodeo ability from Plants vs. Zombies: Garden Warfare 2 has been replaced with Anchor's Away, a grappling hook to give Captain Deadbeard more mobility in order to reach more strategic positions. Furthermore, he can also now charge up his Spyglass Shot weapon the longer he is scoped in for in order to do more damage and his Scurvy Scattershot now deals many small and weak hitboxes instead of one large and powerful hitbox.

Captain Deadbeard's primary weapon is the Scurvy Scattershot, which fires 16 projectiles in a widespread. It deals 2 damage per projectile (max of 32 damage if all projectiles hit an enemy). It uses two ammo and can be fired 10 times in a row before needing to be reloaded.

Captain Deadbeard can be thought of as a Scientist and a Cactus combined into a class. He plays like the Cactus in terms of long-range, yet he can hold his own in close combat, like the Scientist. His Barrel Blast, when given upgrades, is very versatile. Not only does it give you a defense boost when in the barrel, but it gives you a speed boost when lit, and does a lot of damage. His Parrot Pal is small, agile and does a good amount of damage, plus the Eggsplosion carpet bombs an area and does more damage than the Big Bulb Barrage, making it a very solid ability against multiple enemies. Lastly, the Anchor's Away allows you to either get onto higher ground, escape or if very desperate you can hit your aggressor with the anchor for 50 damage. However his major weakness is mid-range, as it is his blind spot, so be wary of characters like the Kernel Corn, Night Cap and Sunflower. His low health means that he is easy to kill.

Overall, Captain Deadbeard is a solid sniper, who can be a threat at and long-range and can hold his own at close range.

Captain Deadbeard is very threatening in long-range as a 2-4 fully charged shot can instantly vanquish any character, and his shotgun is solid, like the Scientist. However, his average health, no good tools at mid-range and lack of versatility in close range means that he isn't that threatening at mid to close range. The best plant to counter Deadbeard would be Rose. Since she has homing equipped with her weapon, you don't really have to fully aim, Arcane Enigma can protect you from Barrel Blast, and can get you farther away from him. Jinx can help you do more damage, plus Goatify can nullify any attempt to get you. 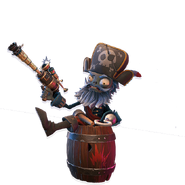 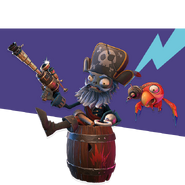