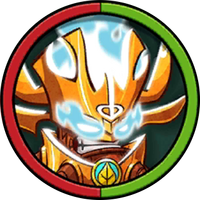 Captain Combustible is a plant hero in Plants vs. Zombies Heroes and the leader of the

Mega-Grow classes. His signature superpower is Blazing Bark, which gives a selected plant +4

He is the hero version of Torchwood.

He is based on the plant with the same appearance (specifically, his Plants vs. Zombies 2 counterpart).

He is likely based on Nova, a Marvel superhero. He also bears a resemblance to Heimdall from the Marvel universe.

If you want to see him blow his top, try calling him "Stumpy". Go on. Try it.

This fiery tree makes flammable combo decks, using Re-Peat Moss or Repeater to win the game in one turn with a flurry of high-Strength Bonus Attacks and Tricks.

Leading the Kabloom and Mega-Grow classes, Captain Combustible is meant for boosting his plants. He can make use of stat-boosting tricks to raise his plants to monstrous strength. He also has access to tricks that do direct damage to zombies or make plants do bonus attacks. A great strategy is using Re-Peat Moss along with stat-boosters, and most notably, Blazing Bark, causing this plant to do devastating bonus attacks with cards. In addition, as many cards in the Kabloom class have high strength, giving them Bonus Attacks allows them to hit the Zombie Hero multiple times per turn, allowing a quick victory.

Captain Combustible's combination of the Kabloom and Mega-Grow classes also makes benificial synergies, as the Mega-Grow class enables him to draw more cards, while providing support for high-strength plants and direct damage tricks from the Kabloom class to ensure a steady supply of cards. As mentioned before, Captain Combustible can use tricks to his advantage, such as to make the normally frail Kabloom plants tougher or do bonus attacks.

Captain Combustible is perhaps, one of the best one-turn-win plant heroes, with powerful strategies involving Re-Peat Moss, Bananasaurus Rex , Dandy Lion King and other heavy hitters within his classes. Thanks to these cards, he can set up incredible combos with bonus attacks and his strong plants to lower the zombie hero's health in a split second.

However, Captain Combustible has one major disadvantage, which is his lack of Amphibious cards. Because of this, it might not be a good idea to use him in levels where there are more water lanes than normal. Try to make up for it using Berry Blast, Cherry Bomb, or Meteor Strike to destroy the zombies placed in water lanes, plants like Sour Grapes and Kernel Corn to damage them, or Whipvine and Sweet Potato to move them to a designated lane. Also, Captain Combustile has no cards that allow him to instantly destroy zombies. The only method to defeating tough zombies is to boost his own plants and fight fire with fire. Sizzle can also be used to replace instant-kill cards.

Captain Combustible will prove to be a tough opponent, as his usage of plants and tricks means that he will be heavily guarded and wreak havoc in your defenses, so it is advised to take care of him as quickly as possible. By using powerful zombies, the player should be able to take down Captain Combustible's defenses and defeat him. Re-Peat Moss is an infamous strategy for Captain Combustible since he can easily boost it and end the game quickly. If you suspect Captain Combustible is about to attempt to win in a single turn by increasing a Re-Peat Moss' stats and having it perform several bonus attacks, play a Gravestone or shielded zombie, Bonus Track Buckethead, or a zombie that is difficult to remove such as Knight of the Living Dead or Portal Technician in front of it.

If you are facing a deck where Captain Combustible uses bonus attacks to his advantage, use Bonus Track Buckethead to nullify them.