Cap'n Sharklunch is a Zombie Battle Leader in Plants vs. Zombies: Battle for Neighborville. He resembles a Captain Deadbeard wearing the "Purple Pirate" Costume and "Sharky Shark" Set.

Cap'n Sharklunch's AI doesn't appear to have any special abilities compared to other Battle Leaders. Even his primary weapon doesn't have any damage buffs, so it shouldn't be too hard to defeat him. Simply avoid his barrel attacks and fire at him at close range, so he doesn't use his Spyglass Shot. 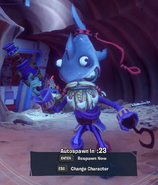