As a ranged specialist the Camo Ranger is tasked with countering the Cactus, matching her range for range. He often loses his gun when setting it down.

With his extra long scope, Camo Ranger can vanquish Plants from huge distances!

The primary weapon of the Camo Ranger is the Camo Surprise. The facts below apply to a fully upgraded weapon.

Super Camo Ammo boosts damage, but is hard to find when dropped.

In order to unlock this variant in the first game, the player must reach Level 10 with the Foot Soldier class. He or she needs to do this by completing challenges with the Foot Soldier and any of its variants. The player earns a character piece for each rank you level up starting at level 6 all the way to level 10.

Camo Ranger is a good sniper that the zombie team has to offer providing if it is used correctly. As with Cactus, Camo Ranger's weapon is somewhat inaccurate up close, so the Camo Ranger should stay back away from the fight sniping plants from a distance. His ammo count, fire rate, and reload speed are also comparable to Cactus, so most strategies with her will work with the Camo Ranger.

This Foot Soldier variant is the zombies' counter to the Cactus and its strategies are therefore largely the same. The differences with the Camo Ranger's rifle is that in exchange for weaker bullets (when compared to the Cactus) it grants a faster firing rate and greater survivability in close-quarters. Good loadouts are the Super Stink Cloud and the Rocket Jump. Your choice of ZPG is throw-up between what you prefer, with the default ZPG being good for destroying singular targets and the Multi-Rocket being good at damaging groups of plants. If you take fire from the enemy team, look for cover and wait until you are done healing in order to continue attacking.

This is also a great character for those aiming to learn how to be a better sniper. The Rocket Jump allows players to explore possible vantage points and understand what makes a vantage point good. The Zombie Stink Cloud allows the player to disappear if spotted or in danger, and the quick countdown of the ZPG trains the player to make accurate shots with a short aiming time. His primary weapon is more suitable for close- to mid-ranged combat than other snipers as well, so the player can defend themselves if they make a fatal mistake.

The Camo Ranger is a really strong opponent to face and is really strong at close range if the player has good aim. Cactus is the best counter at range as the Cactus can match its range before it can get set up. Peashooter and Sunflower should not try to fight Camo Ranger at range unless they are in their Pea Gatling/Sunbeam form (that is if they dont have zpg's). Chompers should avoid Camo Rangers at all costs unless they are on ground level nearby. Try to engage him at midrange and stay mobile to give Camo Ranger players a hard time.

Camo Ranger should try to find places where it can go undetected by the plants for long periods of time. If it is discovered in a snipe point it should use its Zombie Stink Cloud to make a get away to another snipe point.

The Camo Ranger should provide long range support if its teammates are being chased or entering a fire fight. Camo Ranger should be wary that the close proximity of some maps means that it always needs to be ready to flee from a snipe point or to fight to keep it from falling in plant hands. 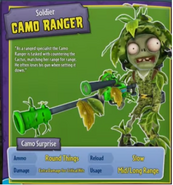 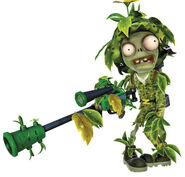 Retrieved from "https://plantsvszombies.fandom.com/wiki/Camo_Ranger?oldid=2176939"
Community content is available under CC-BY-SA unless otherwise noted.