Super Rare (Reach rank 10 with Cactus)
As a master of disguise, she's had to learn how to blend in to a suburban atmosphere. It was far more challenging than she had originally thought.

Super Rare
As a master of disguise, she's had to learn how to blend in to a suburban atmosphere. It was far more challenging than she had originally thought.
Camo Cactus is a Super Rare variant of the Cactus in Plants vs. Zombies: Garden Warfare and Plants vs. Zombies: Garden Warfare 2. She can deal high-damaging headshots at the cost of having a slow fire rate and reload speed.

The standard clip of the Camo Cactus is up to five shots, and six shots when upgraded. She has improved range, allowing you to snipe enemies easily. The Camo Cactus can easily vanquish opponents with headshots.

As a master of disguise, she's had to learn how to blend in to a suburban atmosphere. It was far more challenging than she had originally thought.

The primary weapon of the Camo Cactus is the Camo Shot. She has a further zoom than any other character. All facts below apply to a fully upgraded weapon.

The Camo Cactus's primary weapon is the Camo Shot. It is different from the Spike Shot as it zooms in much further than the Spike Shot and deals more damage but has a slower rate of fire, lower magazine, and longer reload speed. It deals 30 impact damage and 60 critical damage (33 and 66 when upgraded).

A secret stash of ammo is useful for increasing ammo capacity.

In order to unlock this variant, you must reach rank 10 with the Cactus class. You need to do this by completing challenges with the Cactus and any of her variants. You earn a character piece for each time you level up, starting at level 6 all the way to level 10.

Camo Cactus' overwhelming strengths, however, are held back by her equally glaring flaws. In close-quarters combat, Camo Cactus arguably performs the worst out of any character in the game due to her slow rate of fire and her slow reload speed, and the fact that she is even more inaccurate when not zoomed in than the default Cactus. The only way to take advantage of the Camo Cactus' primary weapon damage at close range could be to zoom in for a quick short-range headshot, but this is difficult to pull off, even for skilled players. To counteract the Camo Cactus' slow zoom, drop a Potato Mine after zooming in entirely, and it will instantly zoom in and stay like this until you die. Using this can help you get out of situations when caught off-guard at medium or even close ranges.

Another blaring downside to Camo Cactus is her slow aiming speed. When zoomed in, the Camo Cactus will move very slowly, both movement-wise and aiming-wise, meaning it can be tricky to hit fast-moving opponents. Combining this with Camo Cactus' terrible fire rate and reload time makes it challenging to vanquish foes at full health since they can typically hide after one shot and be safe.

Learn the high points on each map and get to them quickly. High places with a good view of the surroundings are familiar places for the Camo Cactus to be found (though this is true with practically all Cactus variants). However, be on the lookout for Zombot Drones or Parrot Pals, as they can easily vanquish you.

Any Scientist variant can quickly get to the Camo Cactus using a Warp (or both) and then make short work of her at close range. You can also use his Energy Warp, in which he is invincible, and vanquish her once you come out of Energy Warp.

The All-Star can deploy his Long Bomb if the Camo Cactus is in range. Imp Punts are less helpful against this plant since they are best used at mid to close range, where your Football Cannon is more reliable than Long Bomb. In fact, given all of her disadvantages in close quarters, it is scarce to see a Camo Cactus trying to fight at close range, but if you do encounter one doing so, use your Sprint Tackle or Imp Punt to attack her.

The Engineer can use his Zombot Drone or Rocket Drone to find a Camo Cactus and harass her or vanquish her (but be careful not to get spotted and shot down). Otherwise, utilize close combat with her using any of your other abilities, particularly the Jackhammer.

Imps are excellent at disposing of the Camo Cactus alone due to the Imp's size. It will be tough for a Camo Cactus to hit an Imp, especially at short range. If there is a group of plants, consider using Gravity Grenade to bundle them together to save time. Move around frequently, as the Imp only has 75 health. In addition, try not to use Impkata near a Camo Cacti, as the Impkata is slow and can potentially put you at risk of being vanquished if the Camo Cacti is near teammates or is accurate enough. The Z-Mech is likely the most effective way to deal with the Camo Cactus due to its high health and powerful attacks.

Captain Deadbeard (PvZ: GW2)s should fight fire with fire. Try and outsnipe the Camo Cactus and make it so she is not safe sniping, allowing teammates to easily fight without worrying about her sniping them. Try not to use your Barrel Blast or Cannon Rodeo as they are poor options to use from long range. Only use Barrel Blast if you are about to be vanquished, as damage taken is reduced in the barrel. The Parrot Pal is the best option since it will be difficult for the Camo Cactus to hit it. Just make sure they are not near Crystal Guardians or other teammates like Sunflowers that can easily snipe you down. 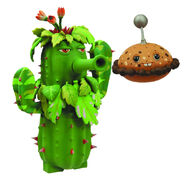 A Camo Cactus figure with a Potato Mine figure 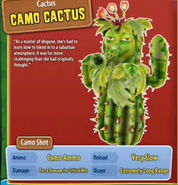