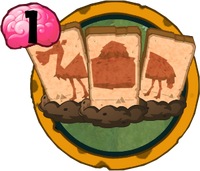 .
Camels - they're filthy, ill-tempered animals that'll spit on you just for fun. But Zombies love 'em all the same.
Camel Crossing is a premium uncommon zombie trick card in Plants vs. Zombies Heroes and a member of the

to play, and its ability gives all zombies on the field +2

Camels - they're filthy, ill-tempered animals that'll spit on you just for fun. But Zombies love 'em all the same.

Not only is Camel Crossing very cheap, it is also a very efficient trick; the more zombies there are, the more effective it is. Playing this trick when strong zombie fighters such as Wizard Gargantuar or Shieldcrusher Viking, zombies that activate their abilities through turns such as Kite Flyer or Wormhole Gatekeeper, or zombies that benefit from taking damage such as Jester or Newspaper Zombie is highly recommended. Since it is also a trick, Paparazzi Zombie can gain a small stat boost on top of more health combined with his ability.

Armored zombies on the field, since the damage done to them are reduced when they get hurt. Using this trick, you can make your

Armored zombies become much more menacing. Even a small group of Coneheads can easily become a force to be reckoned with upon the use of Camel Crossing.

Since this is a pet card, it can be used to activate the abilities of Cat Lady and Zookeeper. While only The Smash can use this combo, it can patch their low health, on top of giving +1

boost to all pet zombies on the field when this trick is used for each Zookeeper.

There is not much you can do against this trick. You can attempt to pick off the boosted zombies with damaging tricks or plants such as Berry Blast or Sour Grapes, though. You can also use Black-Eyed Pea and Sportacus to deter the opponent from playing this but beware of Rolling Stone and Knockout 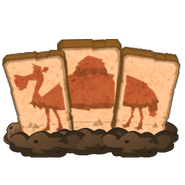 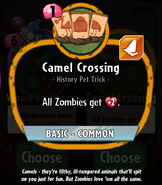