I need my TIME MACHINE!
Calm Chuck is a conjectural name for this article.
If you know the official name or have a better name or
translation for it, please contact a wiki administrator to change it.

Calm Chuck protect plants that are within their shells.

Can be planted over a column of plants

People are saying that in 2012, the world is going to be destroyed. Is it important? Worrying about the unknown is ridiculous in the eyes of Chuck. Chuck believes that it is right to be alive and to continue to eat sugar so that you can feel sweet at any time. Chuck also believes that there is a way to get out of everything.

Calm Chuck (淡定恰客; pinyin: dàndìng qià kè) was a limited edition premium plant in Plants vs. Zombies Social Edition. He could be planted on an entire row and protected plants that were planted within him.

Calm Chuck was a premium plant that was created to promote Chupa Chups lollipops. He was also a limited addition plant, being available from June 25, 2012 through September 24, 2012.

He costed 75 sun and his ability was similar to Pumpkin, being able to encase plants in an edible defensive shell, but instead of being planted on just one plant, he was able to be planted on an entire column of plants similar to plants in Column Like You See 'Em.

Calm Chuck was based on the lollipop company Chupa Chups and its mascot "Chupa Chuck", with the orange barrier being based on Pumpkin and being in the shape of the Chupa Chups logo.

His almanac flavor text is a reference to the belief that the world was going to end on 2012. 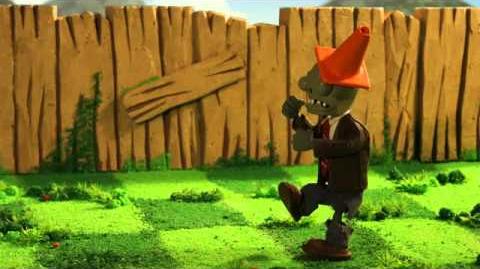 Retrieved from "https://plantsvszombies.fandom.com/wiki/Calm_Chuck?oldid=2333229"
Community content is available under CC-BY-SA unless otherwise noted.