Arena - Apple Mortar's Tournament.
#caketank is the new hot trend. It is trending all over the place. Look under your bed. It's trending there, too.

#caketank stays in place once it reaches the 6th column, so plants that deal greats amounts of damage on a single tile, such as Lava Guava, are great at melting it down. A Level 3+ Squash will return to its tile after the first smash, and then perform its second one, which means that if you place one right under #caketank, it will smash it 3 times (5 times at Levels 9 and 10). Its smashes can also be increased if it is used while Enforce-mint is active. On the other hand, Spikeweed and Spikerock won't be useful at all, because #caketank will instantly crush them, similar to the Cardio Zombie.

Almanac entry (notice the 10 is removed) 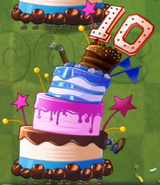 #caketank in an advertisement for Arena (note: it's buttered) 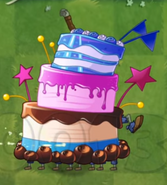 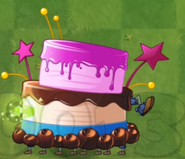 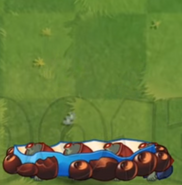 #caketank arriving (Animated)
Add a photo to this gallery 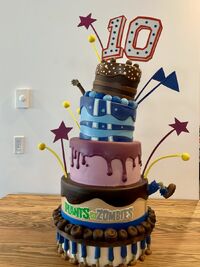 Retrieved from "https://plantsvszombies.fandom.com/wiki/Caketank?oldid=2374131"
Community content is available under CC-BY-SA unless otherwise noted.