Do 4 damage to a Plant.
4 eggs. 2 cups flour. 10 sticks TNT.
Cakesplosion is a premium uncommon zombie trick card in Plants vs. Zombies Heroes and a member of the

to play, and its ability does 4 damage to a selected plant. Its closest plant counterpart is Sizzle.

Its name is a portmanteau of "cake," the real-life dessert it is based on, and "explosion," referring to its ability to damage plants.

Its description is most likely the recipe on how to make Cakesplosion.

Cakesplosion is a trick that can do heavy damage to a single plant, making it suitable for picking on individual threats. This trick is especially useful at destroying certain annoying 3-strength plants, such as Briar Rose, Metal Petal Sunflower, and Bloomerang.

It can also help weaken some plants like Winter Squash if Rolling Stone or Weed Spray is unavailable. However, Z-Mech and Electric Boogaloo are better off not bringing this card due to them having Knockout and Locust Swarm respectively, which are generally more effective and do not activate "When hurt" abilities.

Although it is an Imp card, it can only damage plants, so Impfinity cannot use it to damage his opponent, and therefore cannot use it with Imp Commander to draw cards. However, Toxic Waste Imp can give Cakesplosion the

Deadly trait due to it being an Imp.

Cosmic Imp can also give Cakesplosion

Deadly if Conjured by one, meaning Cakesplosion will basically act as a cheaper version of Locust Swarm in both cases. However, the latter is very luck-based. As Electric Boogaloo, you can combine it with Evaporate in order to destroy a heavily boosted plant, but this strategy is not recommended as there is a cheaper combination that is equally, or more effective.

However, Cakesplosion shares the same drawbacks as Sizzle; it is outclassed by instant-kills in other classes such as Rocket Science, Locust Swarm, and Knockout. While the damaging ability is useful, Bungee Plumber is a cheaper and more versatile pick in almost all decks. Due to these reasons, Cakesplosion is a bad pick for most decks.

Just like all other tricks, there is not a way to counter this the turn it is played. If you are playing as Citron or Grass Knuckles and you are afraid that the zombie hero could use this against a strong plant, use Root Wall on the plant you want to keep alive that turn.

Citron can also use Peel Shield, which can protect multiple plants. Brainana can be played as all

Smarty heroes as well, although it only protects you for the turn it is played.

Guardian hero, preferably Grass Knuckles, can greatly boost the health of their plants with Grow-Shroom, Steel Magnolia, and other relevant plants, which allows them to survive Cakesplosion. Mega-Grow heroes can also protect their plants with Umbrella Leaf, although your opponent can target Umbrella Leaf instead. 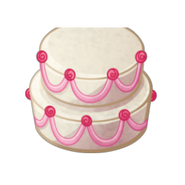 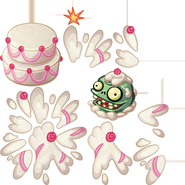 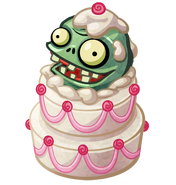 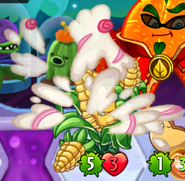 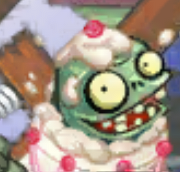 Cakesplosion on the advertisement for the Party Pack

HD Cakesplosion (note that the Imp has hair) 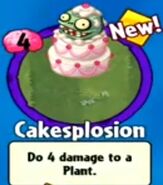 Cakesplosion on the Early To The Party Pack (note the hair)