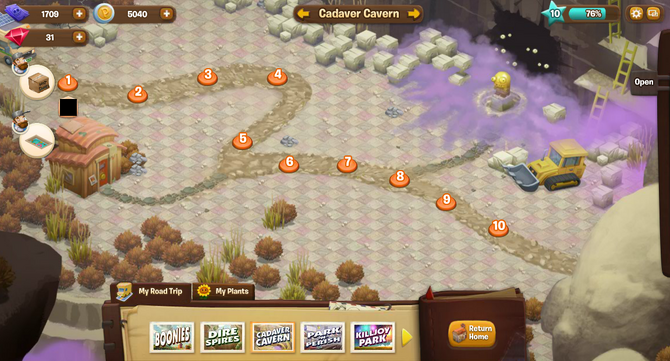 Cadaver Cavern was the third map stage of Plants vs. Zombies Adventures. It introduced the Buckethead Zombie to the player. The player had to complete the ten levels to get the brick to be capable of reclaiming The Car Lot. After Dire Spires Level 7, Officer Ron asked the player to carpool with at least two neighbors or pay 90 gems. This was required to enter Cadaver Cavern. The player received three free Acespearaguses (if Level 2 was not beaten before Acespearagus was added in Plants vs. Zombies Adventures), three free Power Flowers in Level 4, and Popcorn in Level 8.

Crazy Dave will give the player challenges when they are in certain level.

Level 8: Three Hard-nuts will appear on the map, the player must protect them from the zombies.
Level 10: The player is only allowed to use eight Aspearaguses and eight Cherry Bombs to defeat the zombies.