For other versions, see Cactus (disambiguation). 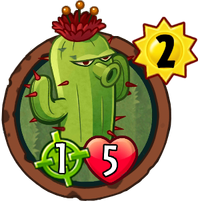 None
"It's true. I'm prickly on the outside but spongy on the inside."
Cactus is a premium uncommon plant card in Plants vs. Zombies Heroes and a member of the

to play and havs 1

Bullseye trait and does not have any abilities.

"It's true. I'm prickly on the outside but spongy on the inside."

Cactus' health of 5 can be a big benefit, especially since she only costs 2 sun. Because of this, she can be played earlier in game, making it hard for your opponent to destroy her during those turns. Her high health makes this card as a reliant defensive wall to protect other powerful Team-Up plants behind her, such as Carrotillery. On top of that, having

Bullseye prevents your opponent from blocking the attack and gaining superpowers to get an advantage. Because of this trait, using cards that boost strength such as Berry Angry and Fertilize aids her well. If you are playing as Grass Knuckles, try to boost Cactus at a safe strength range of about 3 to get her out of range of most instant-kill tricks. She can also be used as a method to finish off zombies with 1 health left, as her high health allows them to survive most attacks.

Due to her being in the flower tribe, she synergizes with Power Flower and Briar Rose. However, only Wall-Knight can do this normally.

If Pecanolith is on the field, Cactus becomes a 5

Bullseye, making her a more potent threat if she hits your opponent. However, shr will get weaker as she takes damage, so keep her health topped up with boosting cards.

Using cards that can lower her strength, such as Pied Piper or Nibble, is capable of preventing her from attacking. However, be wary as the

Guardian class has access to Spineapple to boost her if the aforementioned methods were used. Cards that can destroy her such as Rolling Stone and Weed Spray, as well as

Deadly zombies are useful for taking her down easily. Bouncing her with cards such as Backyard Bounce will expose the plant she is defending, if there is one, making that plant vulnerable to damage. If Cactus is boosted, consider using Rocket Science or Locust Swarm, as her high health will make her last for a while. Cactus also needs to be boosted to be at her most efficient level, so using the above methods early are also good. Due to the low strength, plant heroes will likely not play her later in the game.