N/A (unlocked from the start)
The Cactus is the long-range specialist of the Plant team, able to shoot high velocity needles at faraway Zombies. In her rooted form, she can dispatch her flying Garlic Drone to call in Corn Artillery strikes from above.

N/A (unlocked from the start)
The Cactus is the long-range specialist of the Plant team, able to shoot high velocity needles at faraway Zombies. In her rooted form, she can dispatch her flying Garlic Drone to call in Corn Artillery strikes from above.

Cactus is a playable plant in Plants vs. Zombies: Garden Warfare and Plants vs. Zombies: Garden Warfare 2. She serves as a playable character on the Plants faction. Cactus is the sniper of the plants side. Her long range attack allows her to provide long range support to the plant team. Cactus also have the ability to plant Potato Mines around the map which deal 175 damage to any zombie. She can also place down Tallnut Battlements to block zombies, protect her teams and protect herself. These abilities allow Cacti to create a safe haven for plants and prevent zombies from entering it. She can also fly a Garlic Drone to scout ahead, fight zombies from other angles and call a Corn Strike dealing huge damage in a small area. However, Cacti are ineffective at close combat range due to their rather low mobility and a lack of accuracy without scoping.

The Cactus is the long-range specialist of the Plant team, able to shoot high velocity needles at faraway Zombies. In her rooted form, she can dispatch her flying Garlic Drone to call in Corn Artillery strikes from above.

Spike Shot is the primary weapon of the Cactus, all info below is when fully upgraded.

Cactus should play far from normal combat, as she is very outclassed by the All-Star in closer encounters. Finding vantage points and camping at them will allow a Cactus to snipe off their opponents in a (usually) safer environment. Place down Potato Mines and Tallnut Battlements to protect yourself, since both make large noises upon destruction (alerting the Cactus of nearby threats). Cactus should also be wary of nearby Scientists, who may be able to Warp next to her and vanquish her. Staying out of sight is suggested in that aspect, such as hiding behind obstacles. Cactus can be used strategically, she can provide helpful support to all nearby plants by severely wounding or killing nearby zombies and using her Garlic Drone to clear objectives with a Corn Strike.

In any defensive situation (most preferably Gardens & Graveyards) a crafty Cactus could place Potato Mines behind Tallnut Battlements, hiding the mine from players. This strategy can be very effective, since impatient players would jump over the blockade, only to be KO'd by the mine. Smarter players will either destroy the wall (alerting the Cactus of their presence) or take another route to their objective.

Mines and battlements could also be used as a last resort when under attack by a Zombie. Backing up while placing walls and mines can block off the attacking zombie, allowing you to escape or use the created gap to vanquish them.

When up against a Cactus, it is important to keep behind cover. Making quick shots at the Cactus by randomly popping out of cover can confuse her, and allow the zombies to deal more damage to her than she can to them.

Scientists pose the least and the most threat against Cacti; at point-blank range, the Scientist's Warp allows for sneak attacks, and his weapon is brutal up close. At long range encounters, the Cactus can take down the Scientist much faster. For long ranged fights, the Astronaut and the Paleontologist are the ideal Scientists, as their weapons specialize in distanced encounters.

The All-Star's Long Bomb is great against Cacti that are too far away. The Foot Soldier's ZPG is also effective against a Cactus that's busy shooting down another target.

Watch out for Potato Mines, impatient players can overlook them easily, and damage may not be the only reason they are positioned where they are. They can act as bait to alert a Cactus of your location. Tall-Nut battlements should always be destroyed, because a Cactus could've placed a Potato Mine there.

In Garden Ops, the Cactus is a useful defensive support class on the plant team. Cactus' Spike Shot is long range, making her effective against zombies from afar. Finding a suitable location to snipe is the key in Garden Ops. Due to her low health, she can be vanquished easily if ambushed from behind (especially using the Garlic Drone). Potato mines can vanquish most zombies instantly. Try to place them around the objective. Her Tallnut Battlement can block zombies from entering certain locations. Garlic Drone is able to shoot needles at high rate, dealing high damage to zombies, The Garlic Drone can call out an Corn Strike, dealing massive damage to group of zombies, making it effective against special waves or boss waves. Planting a Heal Flower and protecting it with Tallnut Battlements is a good idea, since its fragility would be resolved with the protection provided.

Cactus is best just staying behind in this mode. She should sneak around the map until she finds a safe spot where she can safely snipe zombies. Cactus should be weary of any zombies around her, as if a single zombie makes it into their sniping spot, they are likely to be vanquished very quickly. Cacti should remember to make good use of their Potato Mines and Tall-nut battlements to make getting to them difficult for zombies. If a Cactus absolutely has to fight zombies at close range, she should not bother with potato mines, but instead use Tall-nut battlements. It is useful for guarding against many strong attacks that the Zombies have, such as the ZPG and Sprint Tackle. In Vanquish Confirmed!, it is recommended to use the Garlic or Artichoke Drone to collect orbs, rather than the Cactus putting themselves in danger to get one. 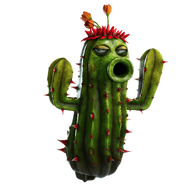 Cactus as she appears in the trailer 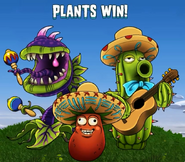 Cactus in the winning screen of Taco Bandits 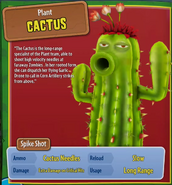 A Cactus using the Garlic Drone in an ability tutorial 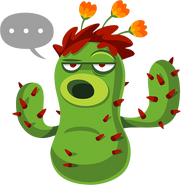 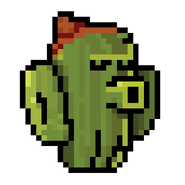 Cactus' icon in Garden Warfare
Add a photo to this gallery

A Cactus gets obliterated by a ZPG explosion

Concept art for a toxic variant of the Cactus

Cactus in a promotional video
Add a photo to this gallery 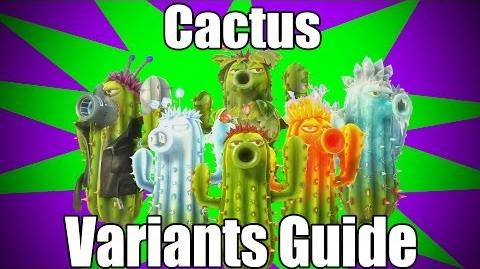 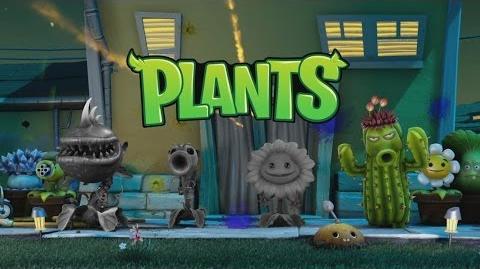 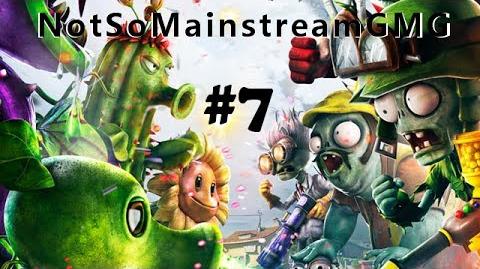