Long range specialists. Use Petal Propeller to get to high ground or take to the air with your flying garlic to attack from above.

Cactus is a playable plant class in Plants vs. Zombies: Battle for Neighborville. She is a

Defend class who specializes in long range attacks, via either her Needle Shot sniper weapon, or through her aerial Garlic Drone.

Long range specialists. Use Petal Propeller to get to high ground or take to the air with your flying garlic to attack from above.

Cactus' primary weapon is the Spike Strike, which functions similar to the Bandit Cactus's Gatling Needle, firing needles rapidly. It deals 7 damage (9 critical) and fires at a rate of approximately 480 RPM (rounds per minute).

As Cactus has always been in the previous games; she is the plant's sniper class. However, in Battle for Neighborville, she gets a few new tools at her disposal. The most obvious and biggest change to Cactus is her weapon zoomed in and zoomed out. When zoomed in, there's a bar on the left-hand side, powering up her weapon over time. The longer it takes to power up, the more damage it does but also uses more ammo as well. Use this ability wisely, as you can do a high amount of damage, but be precise with your shot. Also when you are zoomed in, you are susceptible to side attacks as you can see farther but have an obvious blind spot. Her zoomed out weapon resembles an automatic weapon, yet having high bloom at the same time, like the Bandit Cactus from Garden Warfare 1 & 2. This gives Cactus a better fighting chance at close range. Overall, she still does the same thing as she always does, and does it pretty well.

With Spike Strike, try to pulse fire with the weapon, (meaning to press the trigger button rapidly) so there's less bloom on it. 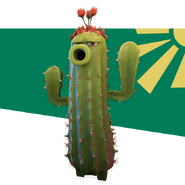 Cactus' icon
Add a photo to this gallery

Retrieved from "https://plantsvszombies.fandom.com/wiki/Cactus_(PvZ:_BfN)?oldid=2241472"
Community content is available under CC-BY-SA unless otherwise noted.