Cactus fires a penetrating thorn that can damage multiple enemies!

Hides and does ground damage when zombies are near

Cactus is a combative, projectile-based plant in Plants vs. Zombies 2. She attacks by shooting piercing spikes at zombies, and being able to bury herself to deal ground damage.

For more information about this character, see Cactus.

In the sequel, Cactus is a premium plant which is advertised alongside Neon Mixtape Tour Side A.

She shoots a spike (every 2 seconds) that goes through two to four zombies, and also hides when zombies are close to her while dealing ground damage (every 0.5 seconds) to zombies that walk over her in this form, similarly to Spikeweed.

Each spike deals 30 damage per shot to each zombie it hits, and the ground damage deals the same damage as the Spikeweed's. Jester Zombies can deflect shots from the Cactus, but still be damaged by her ground attack.

Cactus fires a penetrating thorn that can damage multiple enemies!

Special: hides and does ground damage when zombies are near

When fed Plant Food, Cactus' spikes become supercharged with electricity, increasing her maximum penetration capability by two. Cactus will also deal doubled damage for the remaining duration of her life, whether she is shooting or hiding underground. After this, Cactus can no longer be fed Plant Food. 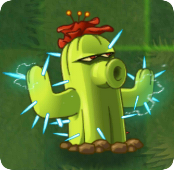 Cactus after being fed Plant Food in Plants vs. Zombies 2

In addition to becoming supercharged, Cactus will shoot a bunch of supercharged spikes, dealing tons of damage. This will also enable Cactus to be fed Plant Food again.

*This column shows its ground damage when hiding.
**After being fed with Plant Food, both its spike and ground damage are powered.

Cactus's main strength is her versatility: She can be planted at the back to shoot incoming zombies, as well as a front-line plant to damage enemies like Spikeweed. Compared to other penetrating plants such as Laser Bean and A.K.E.E., Cactus also boasts a relatively high damage output, which can be further enhanced with Plant Food. However, her unreliable penetration capability makes Cactus not as reliable against large groups of zombies.

Cactus is also a good counter for Shield Zombie, Barrel Roller Zombie, and Pianist Zombie, as her spikes can pierce through each of the zombie's barricades. Because when it hides it acts like a Spikeweed, she can instantly destroy Barrel Roller Zombie's barrel and Pianist Zombie; however, Cactus will be sacrificed, even if she has her Plant Food effect activated. Cactus is also good against Imp Cannon, Zombie King, and Imp Porter as their projectiles can pass through zombies in front of them. It should be noted that Excavator Zombie can shovel up hiding Cacti without stepping on her. Since level 3, is useful against Imps thrown by Gargantuars and can be placed backwards for that.

In Frostbite Caves, Cactus has a great advantage against Troglobite and Weasel Hoarder as her spikes can hit all ice blocks and multiple Ice Weasels (similar to Zombie Chickens). Watch out for Dodo Rider Zombie as he will fly over hiding Cacti. She can also helps with the three Imps thrown by the Sloth Gargantuar if placed at backward.

In Neon Mixtape Tour, Cactus has an advantage on most zombies encountered in this world, as their jams do not have a major effect on the Cactus: Punk Zombie cannot kick her, MC Zom-B cannot use its microphone attack against Cactus (in most cases), Glitter Zombies cannot instantly destroy the Cactus and Breakdancer Zombies and the zombies it kicks can still be affected by Cactus's ground attack. This makes the Cactus a great option to use in this world. The only things to look out for are Hair Metal Gargantuar (as even their shockwaves will instantly destroy Cacti, hiding or not), Arcade Zombie's arcade machine (as it can still crush Cacti, hiding or not), Boombox Zombie's boombox (as it stuns all Cacti not hiding) and Bass Zombie's speaker and shock waves. However, Cactus's pierce can directly hurt Arcade Zombie and Bass Zombie.

In Jurassic Marsh, Cactus works great against pterodactyls and ankylosauruses. Zombies carried by pterodactyls will still be damaged by her spikes. Ankylosauruses cannot fling zombies past the Cactus (unless Cactus was hiding during the fling) and will not be pushed. In the Chinese version however, one must watch out for Egg Stealer Imps and Egg Roller Imps as their eggs can easily crush Cactus and the baby dinosaurs that come with it can also destroy Cacti easily.

Like Spikeweeds, Spikerocks, Spring Beans and Celery Stalkers, Cactus should not be used in Big Wave Beach levels as zombies will eat the Lily Pad and cause Cactus to fall into the water, wasting 175 sun.

However, unlike the first game, it is not as ideal to use this plant against the Balloon Zombies because the Cactus' spikes can no longer pop the balloon instantly.

It is also a bad choice to place Cactus on a Gold Tile close to Imp Porters, as this does not prevent them from setting up their tent. In the Chinese version, she is normally really weak for the Legendary rarity. However it's extremely recommended to get her costume, because one spike Cactus shoots in her Plant Food effect can destroy a speaker in a single hit. This, combined with her upgrades, area-of-effect, fast recharge and somewhat cheap cost, makes Cactus really worth the effort of grinding to get her to Level 4 and her costume.