Cactuses shoot spikes that can hit both ground and air targets.

After beating Level 4-2
She's prickly, sure, but Cactus' spikes belie a spongy heart filled with love and goodwill. She just wants to hug and be hugged. Most folks can't hang with that, but Cactus doesn't mind. She's been seeing an armadillo for a while and it really seems to be working out.

Cactus is a combative, projectile-based plant appearing in Plants vs. Zombies. She attacks by shooting spikes at zombies, being able to stretch herself to hit flying targets.

For more information about this character, see Cactus.

Cactus costs 125 sun and is obtained before Level 4-3, which Balloon Zombies appear. Cactus attacks by shooting spikes at zombies, spikes fired by Cactus deal the same amount of damage as a Peashooter's pea.

This plant's distinction is the ability to stretch upwards vertically to pop their balloons, but the spikes being unaffected by Torchwood. The damage she deals is the same amount as a Peashooter.

Cactus could be inspired by any number of members of the genus Cactacae, but she most resembles a saguaro cactus (Carnegiea gigantea), albeit with a red flower instead of a white one.

Her ability to stretch herself to pop Balloon Zombies is a reference to how Cacti in real life can grow to be some of the tallest plants on earth.

Cactus's main role in the player's arsenal is to shoot down Balloon Zombies before they can get past through the defense, turning them into normal zombies that can be attacked by any other plants. While she will be sufficient in normal levels, the sheer amount of Balloon Zombies that can spawn in Survival Mode, plus its lackluster performance against other threats makes Cactus not a worthwhile choice later on. Cactus also has to compete with Cattail, which can target zombies from any lane and deal twice as much as damage as the Cactus, but suffers from an aiming issue, as well as Blover, which can clear Balloon Zombies from all lanes and ward off the fog in Fog levels.

A column of Cacti should be planted to safeguard the player against potential Balloon Zombies. Cactus is also a possible candidate for getting the Don't Pea in the Pool achievement, but should not be used given her poor damage capability and the lack of Balloon Zombies in Pool levels - most lobbed-shot plants are much more suited for this task.

A Cactus popping a balloon

Cactus seed packet in the iOS and Android versions 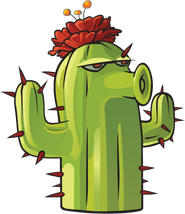 Cactus in the Nintendo DS version

Cactus in a Pumpkin

Cactus in an Imitater Pumpkin

Imitater Cactus in a Pumpkin

A left-facing Cactus in Zen Garden

A medium-sized Cactus in Zen Garden