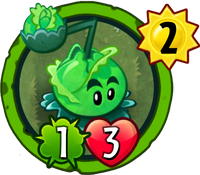 When played on Heights: This gets +1

Cabbage-Pult is a basic common plant card in Plants vs. Zombies Heroes and a member of the

when they are played on a heights lane. Their closest zombie counterpart is Chimney Sweep.

Their description is a reference to the phase "Death from Above", their lobbed attacks, as well as coleslaw, a salad consisting primarily of finely-shredded raw cabbage with a salad dressing, commonly either vinaigrette or mayonnaise.

Cabbage-Pult is a rather underwhelming plant, having mediocre stats for a 2-sun card. While playing them on the heights results in a 2

plant, which isn't bad for a turn 2 play, this also means that Cabbage-Pult's placement is only limited to one lane, and you will lose out on tempo if you play them anywhere else; for a class that focuses on it, doing so could be detrimental to your strategy.

For synergies, you could combine them with Lily of the Valley for a +3

boost, but this can be executed with better 2-sun plants like Doubled Mint, Jugger-Nut, and Fireweed. Instead, Cabbage-Pult has their own place in terms of leafy synergy along with Savage Spinach and Typical Beanstalk (only factually, as Typical Beanstalk isn't recommended even in a leafy deck); due to them having high health, they have a high chance to survive until turn 4, and since they don't pose much of a threat, your opponent will ignore them most of the time, increasing the likelihood even more.

So overall, Cabbage-Pult generally suffers as a good competitive card, because even with their ability, there are better 2-sun plants to use, not to mention that it is very situational. They can serve decently in a leafy deck, but playing them outside of such decks is just not worth it. Also, leafy decks do not have good synergy and are generally unusable in the current meta so you'd try something else instead.

Cabbage-Pult is a pretty weak card for a turn 2 play, so there isn't much to worry about aside from a surprise Savage Spinach on turn 4. Either way, it is recommended to destroy them as soon as possible, although doing so won't be the easiest task since they have a lot of health (if played on heights, which your opponent will surely attempt to do).

Hearty removal cards like Rolling Stone or Weed Spray (only if there are other plants worthy of destroying), or Final Mission would be your best bet, because the other removal cards are much less cost-effective (and not worth it).

Retrieved from "https://plantsvszombies.fandom.com/wiki/Cabbage-Pult_(PvZH)?oldid=2232301"
Community content is available under CC-BY-SA unless otherwise noted.