None
Everyone's always telling her, "You're cute as a button!" But she's not just cute. She's smart and funny too.
Button Mushroom is a basic common plant card in Plants vs. Zombies Heroes and a member of the

. She does not have any traits or abilities.

She is the basic plant of the Kabloom class.

She is based on the Agaricus bisporus, also known as the button mushroom; and a button, a small fastener commonly made of, but not limited to plastic, which secures two pieces of fabric together.

Her appearance is a pun on the word "button" in her name.

Her description references the phrase, "You're cute as a button."

Everyone's always telling her, "You're cute as a button!" But she's not just cute. She's smart and funny too.

Being a mushroom plant, Button Mushroom benefits both Buff-Shroom and Punish-Shroom's abilities, helping you dish out some extra damage. She can also be used to block a powerful zombie and stall it.

However, she is outclassed by many other mushrooms in the Kabloom class and becomes rather useless as you obtain them. Some suitable replacements include:

You should not have any trouble dealing with Button Mushroom. However, she can pressure you if she is used with Buff-Shroom or Punish-Shroom, not to mention that they are very cheap, so it is best to destroy them before there are too many on the field. If you are getting overwhelmed by them, play The Chickening or Weed Spray to take them out. 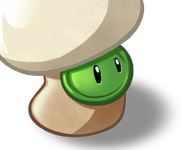 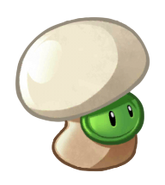 Button Mushroom with a selection icon 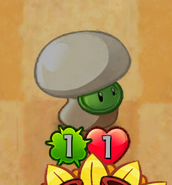 Button Mushroom tinted gray due to a glitch

Button Mushroom with the

Two Button Mushrooms on a lane due to Pair Pearadise's ability

Petal-Morphosis being played on Button Mushroom

Fertilize being played on Button Mushroom 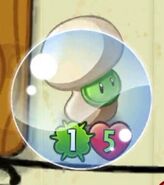 Bubble Up being played on Button Mushroom