Buttered Popcorn is a mini-game exclusive to the iPad, Kindle, and some Android versions of Plants vs. Zombies. It takes place on a Pool level, and the only given plants are four Cob Cannons (on all ground lanes). The objective of the level is to beat the level with the given plants. The player can stun zombies with butter. This level has no Lawn Mowers or Pool Cleaners. 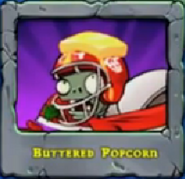 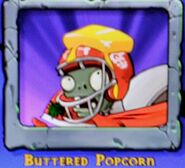 Kindle icon
Add a photo to this gallery

The objective of this mini-game is relatively simple: you need to stop the zombies by launching corn cobs, but you can also temporarily stop zombies by placing butter on their heads. You can use your fingers in a smearing action on the touchscreen to immobilize large numbers of zombies, rather than tapping the heads of individual zombies. It is also worth noting that if a Cob Cannon is eaten, it cannot be replaced and there are no Lawn Mowers or Pool Cleaners to protect the area against the zombies that will inevitably get by.

The most difficult zombie to deal with on this level is Dolphin Rider Zombie, as it moves at high speed, and, as such, hard to stop with butter. Whenever a Gargantuar is less than halfway past the lawn, the player should not shoot a corn cob at it immediately, as it will throw its Imp. Instead, you should stun it with butter to prevent this from occurring. You can also stun its Imp before it eats a Cob Cannon. If the player still cannot beat this level and the device supports multi-touch, the player can use two people, instead of one (one person could control the Cob Cannon, one person could butter the zombies, etc.). The player can also fire two corn cobs at once and targeting the two land lanes closest to the pool so that zombies in an area in all rows will be hit.

Retrieved from "https://plantsvszombies.fandom.com/wiki/Buttered_Popcorn?oldid=2286049"
Community content is available under CC-BY-SA unless otherwise noted.